Police in Ohio made an attempt to stop an Amish buggy in Mesopotamia Township on Sunday night after they observed two men drinking beers on the back of the buggy. Mesopotamia township is in Trumbull County, just east of Cleveland.

When the gentlemen in the buggy saw the cops they hopped off the moving buggy and ran into the woods. Once the police were able to coral the horse, they used the loud speaker on their cruiser to call into the night for someone to come claim their steed. 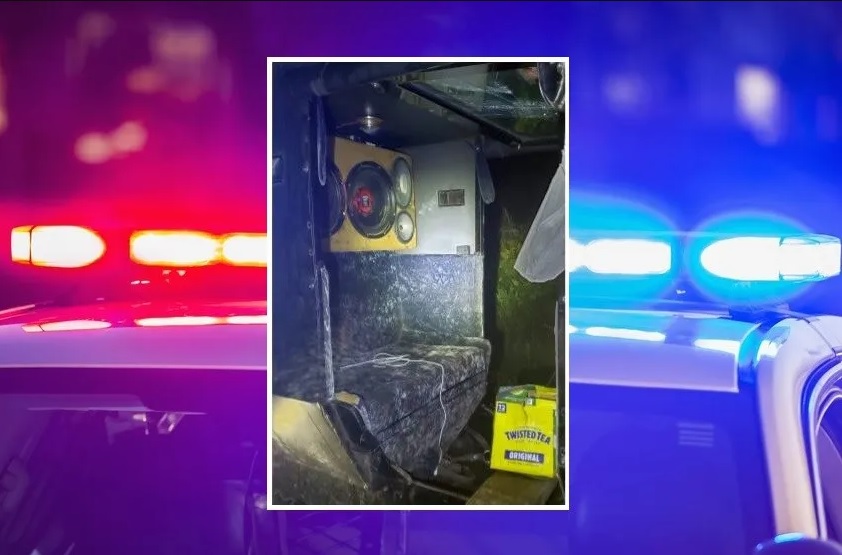 That wasn’t the only loud speaker there was, though, as the buggy they just pulled over was equipped with a sound system. Looking at the photos, I’m guessing they had a couple of 15″ subwoofers and 6 x 9 speakers, plus some smaller highs.

Not a bad set of clunk for the trunk.

The Trumbull County Sheriff is waiting for someone to step forward and claim a horse, as well as an Amish buggy containing alcoholic beverages and a stereo sound system.

A deputy reported spotting two Amish men, who were drinking as they rode on the back of the buggy, on Doneley Road in Mesopotamia Township early Sunday, after midnight.

The officer said when he saw a 12 pack of Michelob Ultra on top of the buggy, he attempted to pull it over.

The two men ran into the woods, and the horse kept pulling the buggy until stopping on a nearby path.

In addition to the beer on top of the buggy, the Deputy not only found several open containers of alcohol but the buggy was equipped with what the report describes as a “radio sound system,” with several large speakers.

Using the cruisers loudspeaker, the deputy called into the night, asking the owner of the horse to come and claim it. No one came out of the woods.

The buggy was towed away. The horse is being cared for by someone living in the area until it can be claimed.

Meanwhile, the deputy is working on writing up citations in the case.

They may actually have been able to rock it til the wheels fell off.

No one has come forward to claim their G-Wagon.