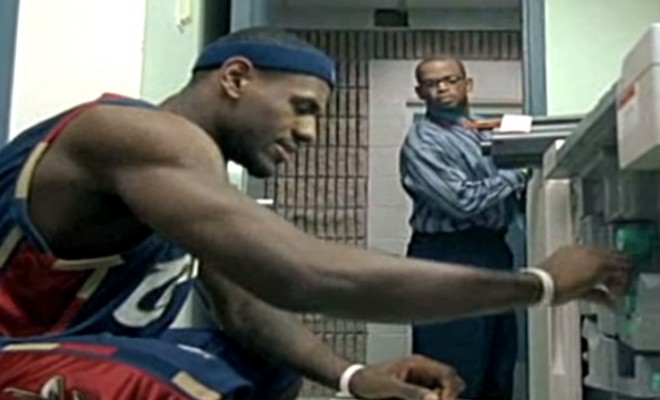 Here Are 21 Stuart Scott ‘This Is SportsCenter’ Commercials

One of the best things ESPN ever did was create their “This Is SportsCenter” marketing campaign. It was a simple idea. Have their anchors appear to be co-workers with some of the biggest athletes in the world or have their anchors act like athletes themselves. There have been countless “This Is SportsCenter” commercials over the years with most of them featuring the late Stuart Scott.

Below are 21 of the funniest from the Stuart Scott collection. I guarantee you get a good laugh from each one.

The Seahawks Win – The Denver Broncos mascot has to wear a Russell Wilson jersey.

The Nickname – Andy Roddick wants to know why Stuart didn’t refer to him as A-Rod.

Maria Sharapova – Scott Van Pelt was supposed to save a seat for Stu, but then Maria showed up.

The Chosen One – LeBron James can’t fix a paper jam.

Calvin Johnson – Megatron transforms into a vending machine to avoid a co-worker.

Chad Ochocino – Stu and the crew help the wide receiver figure out his new endzone dance.

Kobe Bryant & Keyshawn Johnson – Stu and Kenny Mayne help the two adjust to the life of a pro.

The Perfect Show – Dan Patrick goes for the perfect show before falling short with a double negative.

Swimsuits – The anchors at ESPN decided to do a swimsuit photo shoot.

Brats Eating Brats – The Brewers mascots deciding what to eat for lunch.

UMass Minutemen – The UMass mascot using lanterns to tell if Brett Favre is retiring or not.

Derek Jeter – Jeter questioning the guys as to who used his razor.

Fire Drill – No one tells Ben Roethlisberger that it’s a drill.

Tiger Woods – Tiger Woods has a gallery following him through the office.

Michael Phelps – Phelps can’t figure out why he keeps shorting out the computers.

Cheerleaders – Stu requires the help of college cheerleaders to reach the coffee filters in the break room.

Ping Pong – Stu and John Anderson lose a ping pong ball and replace it with one from the NBA Draft lottery.