UPDATED: ‘Bang, two drops in two hours’ – Teens Boast About Random Murders They Committed Because They Were Bored

Boredom.  Because three teenagers in Duncan, Oklahoma were bored, 23-year old Christopher Lane, an Australian native, is now dead.  Because three teenagers in were bored, they will probably spend their foreseeable future in the friendly confines of a jail cell.  All three teens, ages 15, 16 and 17, are being charged with first degree murder.  Whether or not they will be charged as adults has yet to be determined.

Christopher Lane was out for a run, as he routinely was known to do as part of his conditioning.  He played baseball for East Central University in Oklahoma and had just recently returned to the States with his girlfriend from their native Australia.  According to Duncan Police Chief Danny Ford the two had been together for four and half years.

Of the three suspects, the 17-year-old is rolling over on the other two.

“They saw Christopher go by, and one of them said: ‘There’s our target,'” Ford said. “The boy who has talked to us said: ‘We were bored and didn’t have anything to do, so we decided to kill somebody.'” “They followed him in the car to that area, shot him in the back and drove off,” Ford said.

While no witnesses saw the shooting, neighbors did see a black car squeal its tires and speed off after hearing the shots.  One neighbor called 911 after seeing Lane stumbling across the street before collapsing.

“He was face down on the ground and he was shot in the back,” builder Richard Rhodes told Australian broadcasters near a roadside memorial at the scene. “I had another lady stop and we tried CPR on him. And he passed away right here.”

Police worked with local businesses and scoured their surveillance videos to ultimately catch the three teens.  After finding the teens and receiving permission to search their vehicle, they only recovered a dismantled shotgun from the car. The shotgun was not used in the crime and the gun used to kill Lane is still uncovered.

Even worse, ABC is reporting that the teens also killed another innocent victim and then even bragged about it on social media, posting “Bang. Two drops in two hours”.  More information has not been released or reported about this potential second victim.

While it is ultimately up to the district attorney to decide in murder one charges should be filed, it seems like a no brainer to me. The fact that the only premeditation these boys had was boredom should be enough to throw the book at them.  Think about that for a second…

They killed a man because they were BORED.

Remember when you got bored? You complained to your parents and then went and found something to do when they offered to let you clean the house or mow the lawn.  These kids, instead, decided that cold blooded murder was the best option.  And before you anti-gun people start pushing out your soap boxes, please take a step outside your bubble and really look at what is going on here.

This isn’t a matter of gun control. These kids were underage and didn’t have a way to purchase firearms.  This is a prime example of failure to raise.  The adults in these children’s lives have failed them miserably. I don’t know for sure what kind of upbringing they had, but to kill someone out of boredom strongly points to a completely shitty childhood.  Although it is a hard pill to swallow, perhaps these teens didn’t know any better?

Whatever the case, these teenagers need to be tried for first degree murder and as adults.  Jail is clearly the only place these three can be safely be bored.

UPDATE: The images of three suspects have emerged.  Chancey Luna, James Edwards and Michael Jones are who the police are holding right now, while their parents are defending their children. 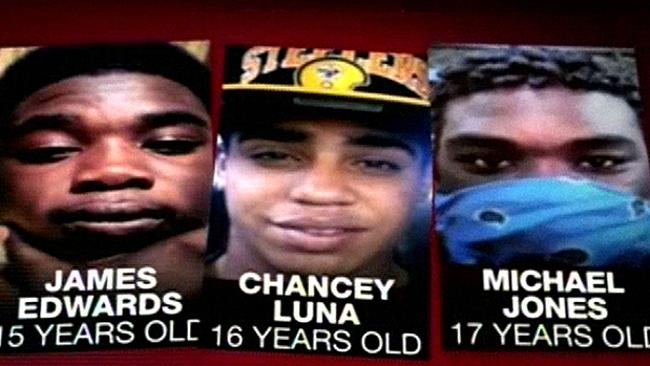 UPDATE 2: It appears mainstream media had portrayed all three suspects as African American males at first.  CBS News now has an updated picture featuring their mug shots.  Also, a new report from CBS that talks about the arrests and interviews James Edwards father will probably make you angry.  During the video below it is reported that Edwards laughed during his arrest and his father thinks he is innocent because “He didn’t pull the trigger, he was just there”. 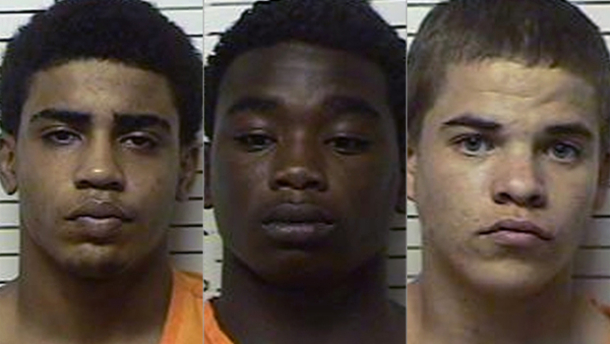 Thank you to the commenters for the heads up on the picture.

I don’t know about you, but I’ll be eagerly waiting to see President Barack Obama incessantly insert himself into this story and demand justice.  I will also be waiting for the Rev. Jessie Jackson and Al Sharpton to start calling for a protest. I won’t hold my breath. Just another day in modern-day America. Disgusting.