It is one thing to have police officers abuse their power and push people around, it is an entirely different situation when they are provoked on purpose so someone can make a viral video of the incident.  The DUI checkpoint video below is shining example of the latter.

Axl David, communications director for the Libertarian Party of Tennessee, a political party that encourages minimum government limited to following the Constitution and Bill of Rights, said that fellow Libertarian Chris Kalbaugh, 21, contacted him about his plans to “exercise his rights” at a DUI checkpoint.  Kalbaugh said that he would be recording the events and David said he encouraged him to do so.

So Kalbaugh went out on the Fourth of July with his camera rolling and went through the checkpoint.  When asked to roll his window all the way down, he responded to the officer with “this is fine”.  The officer was clearly taken aback and asked how old he was to which he said “is that a required question to answer?”.

At this point the officer is rattled and probably thinks that Kalbaugh is hiding something.  It would make sense right?  I’m not and police officer, but I would assume that this kid was up to something if he is acting like this.  Maybe there were some constitutional rights violated but at what cost?  We all know that sometimes, the law isn’t held to the highest standard as it should be but overall I’d say they are doing a pretty good job, right?

This kid may think this is a victory for the Libertarian party or that this will get him his internet notoriety.  But is it worth it? How many cars were waved through that DUI Checkpoint that night because there were officers tied up with Kalbaugh trying to prove a point? He could have inadvertantly allowed for a drunk driver to slip through the checkpoint because his soapboxing agenda was more important. 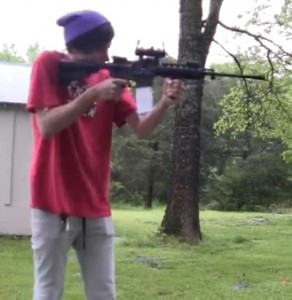 This video, and Kalbaugh, scream “look at me!” even more after learning that this is not his first trolling.  He also has YouTube videos of himself confronting countless homeless people for his Facebook page “Don’t Support Murfreesboro Panhandling“.

If that wasn’t enough, check out the uber-hipsters YouTube channel.  Watch as he, complete with skinny jeans and a year-round stocking cap, tests out his 3D printed AR-15 magazine. That’s right folks, he’s printing his own magazines for an assault rifle, has a vendetta against the government and public officials who “take away” our rights and he wears a stocking cap year round.  Anyone else have a red flag raised?