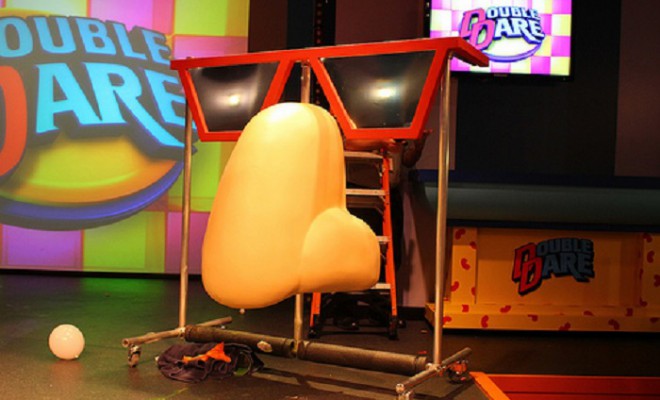 On your marks. Get set. GO!

Was there anything better than flipping on Nickelodeon and catching an episode of Double Dare? Not only did host Marc Summers show us just how cool a blazer, jeans and tennis shoes could be, he showed us that no matter your age, you’re never too old — or young — to root around in a giant nose for a flag. It’s hard to believe it’s been 16 years since Marc Summers has uttered those 64 little words…

“I’m going to ask you a question, and if you don’t know the answer, or think the other team hasn’t got a clue, you can dare them to answer it for double the dollars. But, be careful, because they can always double dare you back for four times the amount, and then you’ll have to either answer that question or take the physical challenge.”

But the hiatus is now over. Thanks to Comic-Con in San Diego, on July 22 con-goers will be treated to a live edition of the popular game show! Not only that, but Nickelodeon will stream the event live on Facebook for all of us not lucky enough to be there/participate. From Vulture:

It’s been 30 years since America’s children began to fulfill their most burning desire: to face-plant into a giant, slime-filled foam pie crust in front of their dads and America. InDouble Dare’s honor, Nickelodeon’s The Splat will stream a “special live edition” of the show from Comic-Con International in San Diego. The program kicks off Friday, July 22 at 9:30 p.m. PST on Facbook Live. Original host Marc Summers, who returns after a 16-year DD hiatus, will wrangle the red and blue teams as they subject themselves to classic obstacles like “the Wringer, Down the Hatch, the Human Hamster Wheel” and, of course, the Double Dare Nose. Summers will subsequently host a mix of new game segments and classic episodes during TeenNick’s Double Dare Week, which begins Monday, July 25, and ends whenever they finally find all those goddamn flags. Who dropped those flags everywhere? They got into all the gigantic foam pizzas and sludge slides. What a mess. They must miss them all terribly.

Put a reminder in your phone right now so when you’re undoubtedly at the bar on July 22nd at 9:30 PST, you’ll remember to open Facebook, for reasons other than creeping.