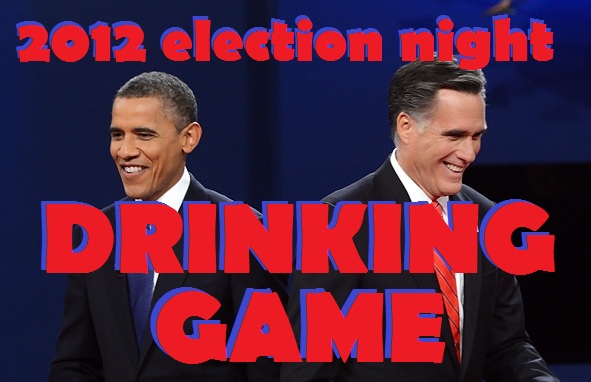 We pride ourselves on our ability to make drinking games that will punish your liver.  Most recently, our Home Run Derby Drinking game helped everyone get through the mindless rhetoric that is Chris Berman’s announcing skills.  Earlier, we brought you the NFL Draft Day Drinking Game and before that, almost a year ago, was our inaugural Victoria’s Secret Fashion Show Drinking Game (which will be back in a few weeks, shwing).

Now we have a real treat for you tonight.  While you watch history unfold with this very close election we want you to sit back, relax and binge drink.  That’s right, according to the political ads on television, we are screwed either way so you might as well deliver a rabbit punch to your liver and put yourself out of misery sooner rather than later.

Good luck to everyone and their candidate on Election Night!  As always, we can only hope this game is played in the safety of your own home.  Where ever it is played, take pictures and send them to us!