We are down to the Cougar Madness Erotic 8 and there are some serious matchups to look forward to!  I don’t know how I am going to vote yet and I am sure I am not the only one that is torn.  How am I supposed to pick between Modern Family sweetheart Julie Bowen and 2009 Cougar Champion Mary Louise Parker?  That might not even be the hardest match up to choose from on that side of the bracket too.  Below those two you have Italian beauty Monica Bellucci going against the perennial hot mom Halle Berry!  As Marco from Tripoja would say…Good luck. 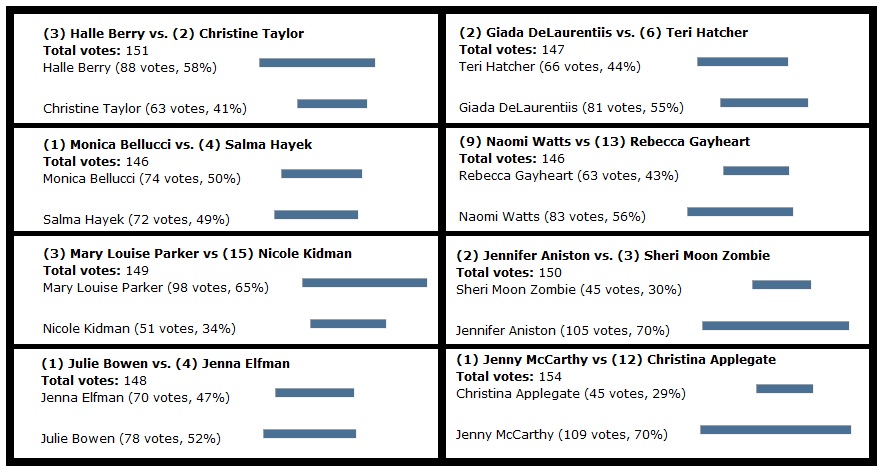 The other side of the bracket looks to be a little more cut and dry.  Now, I can’t say for sure these women are locks but it stands to reason that Jenny McCarthy and Giada De Laurentiis should have cake walk into the Fantasy Four.  I know Jenny McCarthy vs Jennifer Aniston looks like a battle on paper, but if you look at history it tells another story.  McCarthy is younger and has a better following.  Aniston has never made it past a Fantasy Four, despite being hugely qualified.  In my opinion, McCarthy steam rolls Aniston.  I hope you all prove me wrong for Jen’s sake.  Giada De Laurentiis vs Naomi Watts isn’t even a competition.  Watts made it through on a whim.  If Gonzaga didn’t suck and lose to Wichita State, Sofia Vergara would still be in and be rolling.  Fact.

Don’t take what I say as the final word though!  Remember, Cougar Madness 2013 lies in your hands.  Spread the word for your favorite Cougar and make sure she is getting enough votes to push her to the next round!  Voting will be open til around noon on Friday at which point we will post the Fantasy Four matchups!