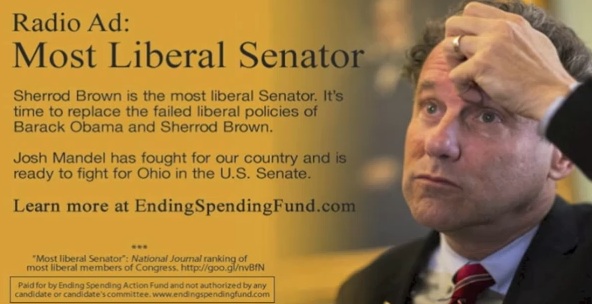 This time of year, we are treated to some of the best in political campaign ads.  Most of the time, they will spend there 30-60 seconds bashing their opponent.  They will go after their past decisions, or where their opponent stands on important issues, and try to sway the voter in their favor.  This is nothing new, everyone does it and it is widely accepted.  However in Ohio, a third party campaign for Senate hopeful Josh Mandel may have overstepped the boundaries.

Playing off “The Most Interesting Man in the World” ad campaign from Dos Equis, Mandel’s ad accuses Sherrod Brown of a lot of different, serious, things.  First, he starts out with the epic line;

ZING.  That first line is sure to get any Ohioans attention right away.  It did for me while I was driving the other day.  The next statement keeps up with the humor of the first.

“He wants to outlaw dentists from Toledo to Youngstown, because Sherrod Brown is against drilling..anywhere.”

Clever, right?  They continue on with quotes that he is for Obamacare and that it will make a trip to the Cleveland Clinic seem like going to the DMV.  Even further, the ad claims that Brown thinks that Dennis Kucinich is awesome and the way he handled being mayor of Cleveland was “awesome”.

For those of you who don’t know, Dennis Kucinich was the mayor of Cleveland from 1977-1979, when he was only 31 years old.  During his tenure, Kucinich had a hit put on him by the Cleveland Mafia and he also bankrupt the city.  Kucinich is also known for having one of the strongest liberal perspectives in Washington.

Perhaps the best part of this third-party ad is that the creators, Ending Spending Action Fund, admitted that the claims weren’t true!

“The ad is actually meant to be a parody,” said Danielle Hagen, spokesman for the nonprofit conservative political action group. “If you look up similar ads like ‘the most interesting man in the world,’ you’ll be able to see the hyperbole.”

Also, for good measure, they throw in the “stay thirsty, Ohio” to make sure you know they are playing off the Dos Equis commercials.

Ohhhh, you gotta love this time of year…

Please follow and like us:
Related ItemsCommercialJosh MandelPoliticsSherrod Brown
← Previous Story Barack Obama Has 99 Problems but a Mitt Ain't One
Next Story → Saturday Night Live Gives Their Take on Brad Pitt’s New Chanel No. 5 Commercial