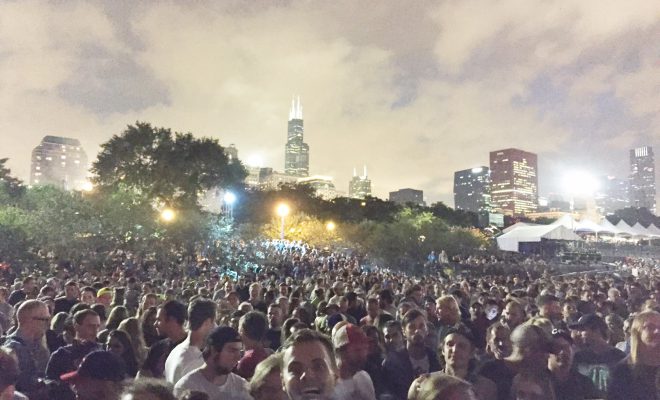 Chance The Rapper, The Killers Sit Atop 2017 Lollapalooza Lineup

While Bonnaroo might still be in the lead in terms of festival season lineups, Lollapalooza is making a strong bid for a close second place.

Released Tuesday morning, their 2017 lineup reads strong from top to bottom. Lollapalooza is sticking with the 4-day festival after moving from three days to four for their 25th anniversary in 2016. After a rather poor showing on the first day in 2016 — weather was also a factor — it’s clear they are front loading their daily lineup to atone for that misstep. 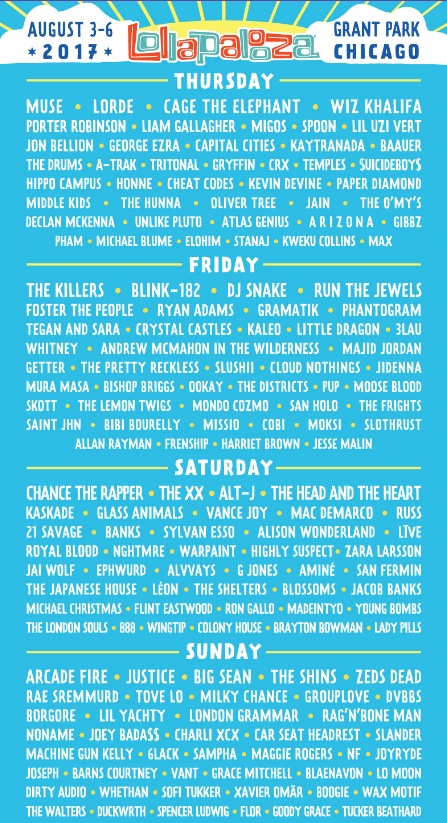 I could sit here and tell you how badass it is that Muse is headlining day one, but the only reason I would do that is because if I were going this year — and I’m still on the fence — I would only be going Friday to Sunday. So the only reason I would think it was great was because I wouldn’t have to see them. Just an opinion. Don’t hate. The rest of day one looks pretty good in terms of day one’s.

Cage the Elephant is enough of a reason to attend day one, rain or shine. And for the sake of rocking your face off, I really hope it rains because that’s when Matt Shultz goes bananas and really puts on a show. Anyone at Lolla 2011 will tell you the same. Wiz Khalifa, Porter Robinson and Cheat Codes round out an eclectic day one.

Day two — formerly known as day one — has, in my opinion, the can’t miss headliner with The Killers. We saw them last year at Bunbury Festival in Cincinnati and they were unreal. Coupled with Run The Jewels, Crystal Castles, 3LAU (who will undoubtedly put teenagers in the hospital at Perry’s) and Ryan Adams, day two seems solid. Also, an interesting add is Blink-182, who have a Third Eye Blind feel from 2016. Foster the People will be a good one to see, provided they only play tracks from Torches. Yeah I said it.

Everyone will be hitting their stride on Saturday and with Grammy winning Chance The Rapper holding down the headlining spot, it should be a good one. The hometown boy will be sure to put a show that will go down in Lolla lore. A lot of people remember him playing the small BMI Stage in the woods in 2014. Now, it’s the big time.

The XX is an acquired taste for some, while Alt-J never disappoints. With their new album Signs of Light, I would tell you a must see for Saturday would be The Head and the Heart. Vance Joy, Kaskade and NGHTMRE (another one who will kill the teenagers at Perry’s) will be good too. One I’m intrigued by for sure would be Warpaint. There’s nothing better than an all female band.

If you’re still alive for Sunday, it will be a nice, relaxing day. Arcade Fire will headline again as they throw it back to 2010. There are rumors of a new studio album from AF, so this headlining makes sense. Big Sean, Zeds Dead, Tove Lo (heart emoji) and Charli XCX (puts on a great show) will be worth catching. A surprising name to see on the lineup sheet is Cleveland boy Machine Gun Kelly. That is one that will definitely be worth stopping by.

So at first glance, the Lolla lineup for 2017 is pretty good. But we’ll have to wait and see their scheduling, which is always a kick in the crotch because they always make you make the impossible decisions. And with the main stages being about a mile away from each other, pack your Nike’s and charge your Fitbits.

Please follow and like us:
Related ItemsChance the RapperLollapaloozaMusicMusic FestivalThe Killers
← Previous Story Accept No Labels: Artists The Music Industry Will Never Own
Next Story → It’s Time To Finally Set Up That Garage Band