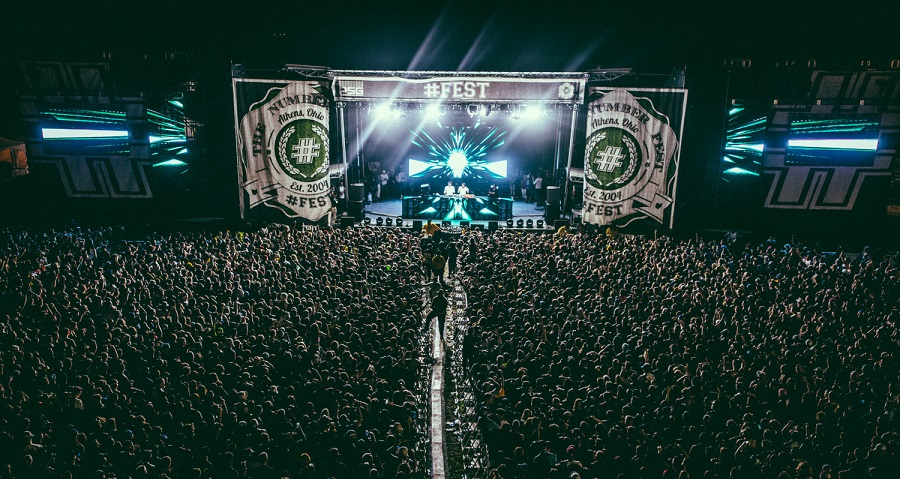 I didn’t know what to expect when I rolled into Athens, Ohio aboard the “Fun Bus,” but I knew with the squad we had in tow, it was going to be a shit show.

Numbers Fest (#Fest) is the annual music festival found in Athens, Ohio just a stones throw from the campus of Ohio University. While this was the 14th installment (#14Fest), it was my first dabble. We arrived around 2pm and promptly entered the venue.

Since we were there early, there really weren’t any lines to speak of. That would change however around 5pm when it seemed the hoards of students that had spent the majority of the day slamming keg beers all showed up at the same time. The serpentine line to get in looked miserable. I would point the poor planning finger at the students rather than Prime Social Group.

I was able to catch a bit of Cal Scruby and Wes Walker & Dyl and was pleased. Thanks to Walker & Dyl, I will have Jordan Belfort stuck in my head for at least the next week.

On the flip side, Niykee Heaton, while a fantastic Instagram model, is one of the worst performers I’ve ever seen. Yeah, she gyrates and pretty much strips on stage, but what is she doing? Her songs are not good and she is not good at performing them. It’s a volatile mix. Her time on stage really mellowed out the crowd and just about sucked all of the energy out of the festival. Stick to pictures.

Thankfully, Lil Dicky and Fetty Wap were able to bring the crowd out of the Heaton induced coma and get everyone moving again. Dicky’s rendition of the Star Spangled Banner was a festival first for me. Another first was seeing an artist bring a girl on stage, sit her in a chair and remove his pants to give her a lap dance, which is exactly what Dicky did.

Fetty made good use of his time, playing his hits from his self titled smash hit album released last fall. Songs Jimmy Choo and 679 obviously killed it and no one can amp up a crowd like the Remy Boys. However, the best moment of his set would be the Trap Queen sing along that saw about 20,000 people rapping in unison.

The Numbers Fest came to a close with one of the most explosive sets I’ve ever personally witnessed at a music festival. The Chainsmokers unloaded a set that I would put against Deadmau5’s set from 2011 Lollapalooza in the rain. It was just incredible. The even dropped a brand new unreleased track which made the the crowd even more lit. Remixes of Twenty One Pilots, Drowning Pool (unreal), Journey and The Weeknd were also sprinkled into their set.

Overall, #Fest was as well organized as it could. I think the only thing that needs addressed for next year is transportation for students. The majority of the attendees were left walking the 3 miles back to campus along a pretty busy road. Other than that, I’d say #Fest was a success. Check out Rob Berry Media for more awesome pictures.

See you next spring, Athens.