I’ll tell ya what, Ohio University students love their “fests”.  Last week, when an armed robber was on the loose, they started #FugitiveFest and proceeded to get wrecked.  Now, another fest is on the horizon and it looks to be a shit show as well.

The 11th edition of The Numbers Fest, known better to Ohio University students and alumni as 11Fest, has released the two headliners for their day long show coming up in April.  Last year, at 10Fest, they had 3LAU and Juicy J.  A nice mix of EDM and rap.  They are staying true to that theme, but stepping it up in a big way this year with the announcement of Steve Aoki and Kendrick Lamar.  EDM and rap again but leaps and bounds better than the previous year. 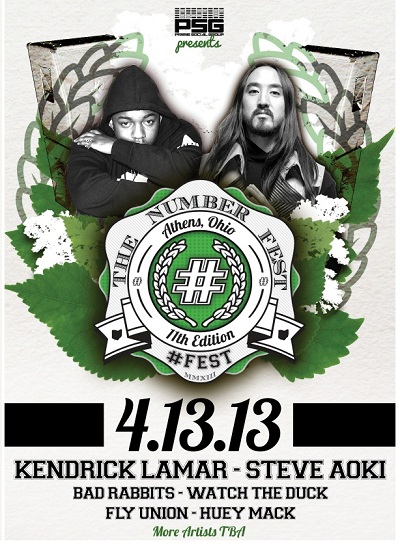 Also announced on the lineup posted today were some acts that many might not be familiar with such as Bad Rabbits, Watch the Duck and Fly Union.  West Virginia University rapper Huey Mack has also been announced.

Per their website, for those of you unfamiliar with the Number Fest.

#FEST is The Premier College Music Festival Experience. Established in 2004 at Ohio University, #FEST has grown to become the biggest and best Collegiate Music Festival in the United States. For the last decade, #FEST has helped launch some of today’s brightest music stars to new heights. Based in Athens, OH, the ambiance and culture surrounding #FEST and the community in which the Festival was founded creates a once in a lifetime experience for all in attendance. #FEST is like no other college party in the country. Our mission is based around providing the best music and entertainment possible for lowest price possible. With our one of a kind BYOB format, this is as Woodstock as it gets, or so says the 15,000 plus in attendance every year. Prepare yourself for a day full of fun, sun and memories that will last well beyond your days on campus.

That’s right, the festival is BYOB!  If that wasn’t enough to sell you on the festival, the tickets are cheap too.  You can purchase your General Admission ticket here for $30!  That’s worth it just for Aoki and Kendrick.  Grab your tickets now and I’ll see ya in Athens.

Please follow and like us:
Related Items11FestMusic FestivalOhio UniversityThe Numbers Fest
← Previous Story Bam Margera’s Music Video for ‘Bend My Dick To My Ass’ is Equal Parts Jaw Dropping and Hilarious
Next Story → The Grammys Should Be Boring This Year Since They Have Banned Butt Cracks, Underboobs & More