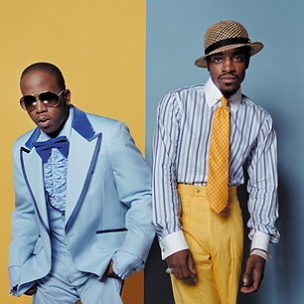 Speculation of an OutKast reunion was running rampant since the end of The Coachella Valley Music & Arts Festival last April and with the release of the lineup it is now official.  The Atlanta based duo of Big Boi and Andre 3000 will come back together to rip faces off on the first night of the three-day festival. Seems to me like they should be the act to close the festival, but I digress.

For those of you who peruse message boards, you know lot of rumors will fly in the ten or so months leading up to the official release of the lineup. I say official because normally you will  see about ten different lineups made by fan boys who know Photoshop too well and have too much time on their hands. Well fear not message board mongrels, Coachella has released the full lineup and you can see it below. 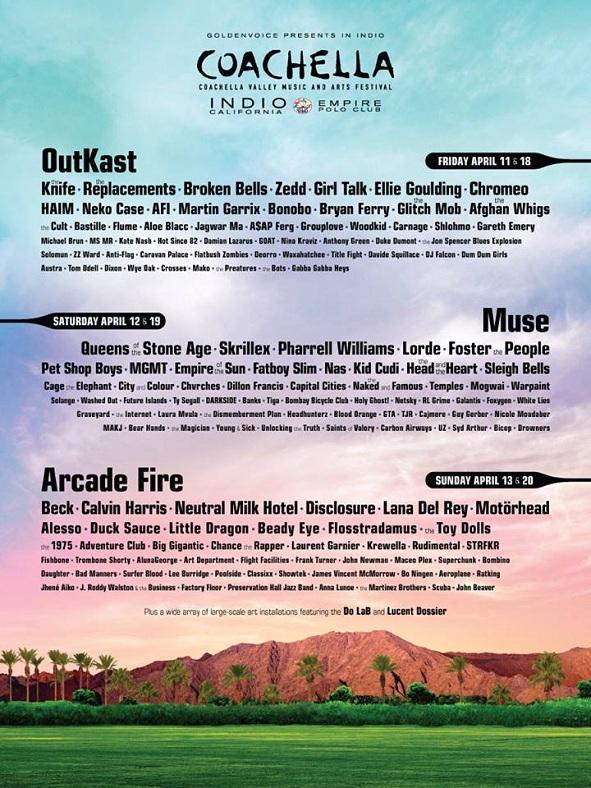 Everyone will have a different opinion of this lineup because it’s music and you can’t please everyone. For instance, last year when The Stone Roses were announced, there were a large group of people who were beyond excited for it while I sat there and scratched my head because I had/have no idea who they were/are. Here is my take on the weekend after looking at the lineup for only a few minutes.

The busted their proverbial nut early. A reunion of OutKast should be what closes down the weekend festival, not Arcade Fire. The fact that they brought in Zedd, Girl Talk, Ellie Goulding, The Glitch Mob and Chromeo, among others, on the first night shows that they are setting a more EDM heavy tone for this years festival than last year. I would say more about day 1 but I can’t read the smaller names.

Day two ends with Muse, but if it were me I would be riding the Ferris Wheel or climbing art instead. Never liked Muse, but like I said, it’s an opinion thing. This may be the climax to some peoples weekends. Skrillex, MGMT, Fatboy Slim, Nas, Sleigh Bells, The Naked and Famous, Capital Cities and Dillon Francis help to even out day two. In fact, I’m sure one of those acts (probably Skrillex) will be playing opposite Muse so people won’t be slitting their wrists. Again, it’s an opinion.

The last day is probably the weakest. The finale of the festival is Arcade Fire, whom I’ve heard are fantastic live, but I have a hard time getting excited for. Beck, Calvin Harris and Alesso should be pretty good sets. However, once you hear “Barbara Streisand” from Duck Sauce, you can probably go grab a soft pretzel and some shade. Flosstradamus and Big Gigantic should be checked out as well.

They could have added more hip hop to the line up but overall it’s not bad. I’m definitely not spending the $2,000 plus on heading to Coachella from the midwest but if you live in California, then it’s probably worth it to check it out. Otherwise, no thanks.