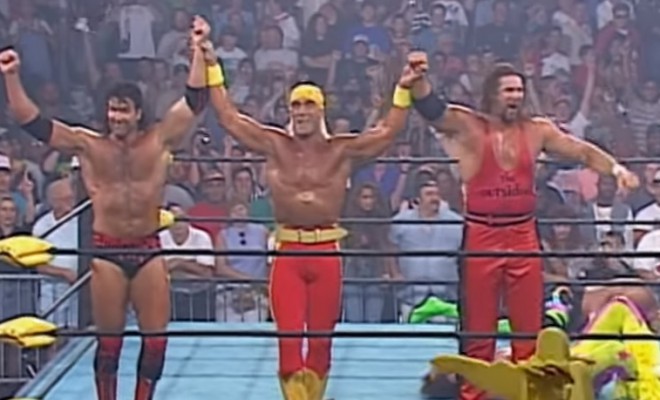 Can you believe it has been 20 years since WCW Bash At The Beach 1996? It’s crazy, right? Goddamnit we are old.

Twenty years ago, the WCW got something right for once when Hulk Hogan made the most epic of heel turns and joined Scott Hall and Kevin Nash to form what would be know as the New World Order…the N.W.O.

The main event featured The Outsiders — Hall and Nash — with a mystery partner (Hogan) vs. Lex Luger, Sting and Randy Savage. Let that one sink in. Look at those names again. A veritable who’s who of late 90’s wrestling.

It started with Hall and Nash by themselves against the other three until Luger was knocked out cold, leaving Savage and Sting alone. After a back and forth, Hogan came down the ramp. Hogan had always been a fan favorite face and it appeared it was coming to help out Randy Savage and Sting, until he gave Savage two atomic legdrops.

After the match, the three appeared in the ring together while fans booed and threw trash. Mean Gene Okerlund asked Hogan how he could turn heel and Hogan told him they were the future of wrestling and famously said “you can call this the new world order of wrestling, brother.”

Please follow and like us:
Related ItemsBash At The BeachHulk HoganNWOWCWWrestlingWWE
← Previous Story Mike Napoli’s Game Winning Moon Shot Got A Great Call From Tom Hamilton
Next Story → Chicago Bulls Forward Doug McDermott Is Giving Up His Number For Dwyane Wade