Baker Mayfield Mic’d Up Should Excite All Cleveland Browns Fans

The Cleveland Browns improved to 3-6-1 this past Sunday with a win over the Atlanta Falcons and I’m not using the word “improved” in a sarcastic tone here.

If you watched the game, you saw the emergence of quarterback Baker Mayfield as a true leader of the team. With interim offensive coordinator Freddie Kitchens opening up the playbook and new leadership under interim head coach Gregg Williams, Mayfield looked more poised and comfortable in the pocket than he had all season, including in other wins.

During the game against the Falcons, which saw Mayfield have a perfect QB rating (158.3) against the blitz as well as throw for three touchdowns, the rookie quarterback was mic’d up by the NFL and the results are pretty awesome. 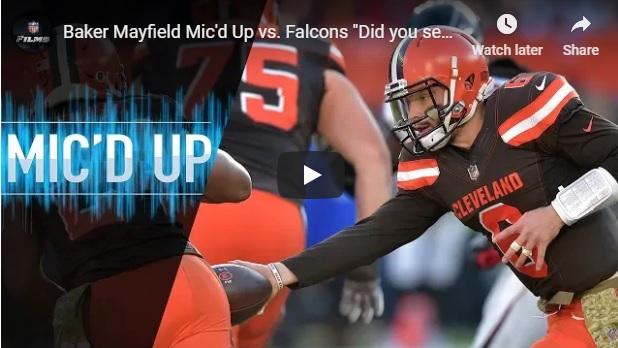 If you’re a Cleveland Browns fan this has to excite you. Watching Mayfield interact with his teammates and coaches exudes the leadership that the organization has desperately been searching for since their return to Cleveland.

“Bro, you see my hand-off on that play?”

Of course, this is all during a winning effort where Mayfield faced little adversity.

Either way, both the video and Mayfield on Sunday’s is fun to watch.

Related ItemsBaker MayfieldCleveland BrownsMic'd UpNFL
← Previous Story Are Sports Leagues Justified In Their Fear Of The Legalized Sports Betting?
Next Story → UConn Coach Dan Hurley Knows When to Get Serious