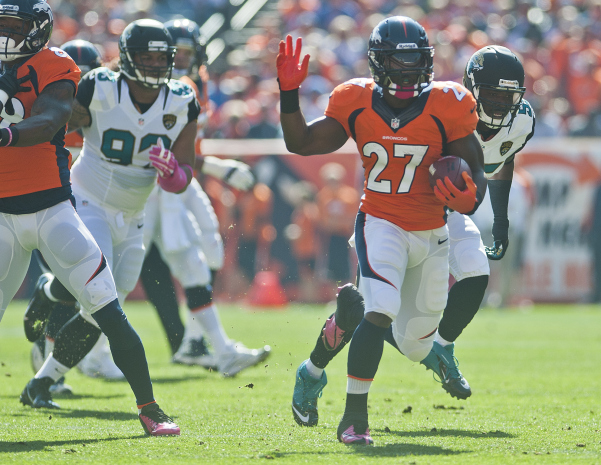 Broncos Beat the Jaguars, But It Wasn’t the Blowout Vegas Expected

Last week, when the Vegas overlords set the betting line for the game between the then 5-0 Denver Broncos and the 0-5 Jacksonville Jaguars, it really wasn’t a surprise to anyone that the Jaguars were getting 28 points according to NFL betting lines online (click to view more lines here).  It was the largest point spread in NFL history and for good reason.

The Broncos had opened the first five weeks of the season on a tear.  They had scored a combined 230 points behind the almost flawless play of Peyton Manning (150/198, 1,884 yards, 20 TD, 1 INT*) and it seemed as though no one, especially the Jaguars, would be able to slow them down.

And why would anyone think that the Jaguars would show up to play on Sunday anyway? The team had scored just 51 total points before Sunday, which is exactly how many points the Broncos scored on the Cowboys last week, and the play of their quarterback Chad Henne was shoddy at best (53/95, 601 yards, 2 TD, 2 INT*).  So naturally, the Jaguars would just come to Denver and roll over and play dead, right?

At halftime, the score was 14-12 after a pick-six by Paul Posluszny with a failed two point conversion.  That’s right, the team that was supposed to get steam rolled was right in the mix.  In fact, during an in-game update while watching the Saints vs Patriots, the segment was started with “Don’t look now, but the Broncos have already scored on the Jaguars”.  It was 2:51 seconds into the game and CBS had already thrown there hands up in the air with a “here we go” mentality.

There was a lot of football left to be played.

In fact, after Manning marched the Broncos down the field to make it 21-14 to start the third quarter, Chad Henne (yes, same as mentioned before) took the Jaguars 80 yards to keep the game close at 21-19.  It was pretty clear at that point that if you took the Jaguars with the points, you had a more than decent chance at covering.

Midway through the fourth quarter was when you could hear the collective sigh of relief in Denver.  Knowshon Moreno punched in his third touchdown of the day to put the Broncos on top 35-19, where it would stay for the remaining 9:09.

Although the Jaguars lost, I am happy as hell they covered and gave Denver their hardest test of the season.  I was saying all week that a 28 point spread in the NFL is an absolute slap in the face and that these guys would come ready to play. Good for them, good for Jacksonville.  Perhaps, though, Broncos cornerback Champ Bailey said it best.

“This is still the NFL,” Bailey said. “Nobody’s a cakewalk in this league.”

*Both stat lines do not include stats from this game.