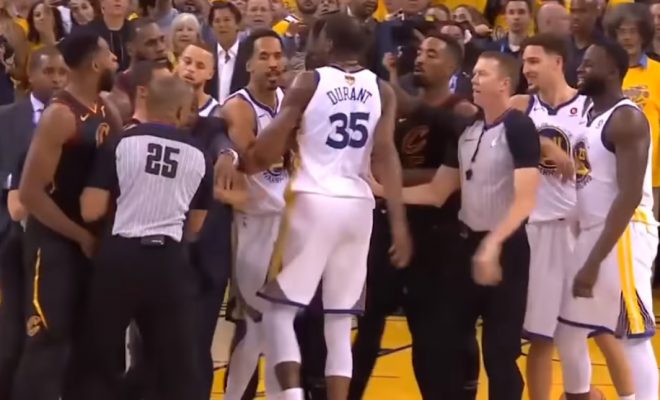 After planning a parade for a Cleveland Browns winless season, and actually going through with it, it’s hard to tell when fans of Cleveland are joking. After Tristan Thompson allegedly punched Draymond Green, it’s clear they are not here to joke at all.

According to Marcus Thompson II of The Athletic, Tristan Thompson had a “scuffle” with Golden State Warriors Draymond Green at a ritzy ESPY’s after party hosted by LeBron James and is said to be a spill over from the altercation at the end of game 1 of the 2018 NBA Finals.

“It was a sucker punch,” one source at the party told Thompson. “But, to be honest, it wasn’t really a punch. It was more like a shove.”

WHATEVER. SOMEONE ACTUALLY WENT AFTER DRAYMOND GREEN FOR BEING A DOUCHE.

Since the story was published, more information has been coming out. There are rumors that it had something to do with Khloe Kardashian and there are rumors that it may have been unprovoked. The latter, though, is hard to believe since Draymond Green acts like it’s unprovoked after a player comes after him on the court. Everyone knows he needles people relentlessly and then cries foul when the seek comeuppance.

Regardless of the why, Cleveland fans are focused more on the fact that yeah, they got swept in The Finals, but Tristan Thomspon punched (allegedly, maybe a shove) Draymond Green! As is customary and traditional in Cleveland, a parade has now been planned for Oct. 13 at 3:10pm.

“Parade in Cleveland on October 13th (Tristan’s number) at 3:10 p.m. (For obvious reasons). We would all like to punch Draymond in the face, so we need to celebrate someone who (probably) did! Bring canned goods I guess. Go Cavs.”

Obvious reasons would be the Warriors blowing a 3-1 lead.

Is this a total waste of time? Maybe. Is it something that is worth celebrating? Definitely.

Related ItemsCleveland CavaliersDraymond GreenNBATristan Thomson
← Previous Story Who is Actually Responsible for a Tailgate Injury?
Next Story → 5 Reasons we all love soccer