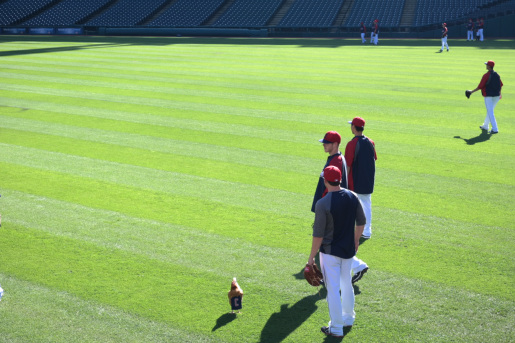 Something peculiar is happening at Progressive Field and it has nothing to do with the indigestion caused by your lower intestine trying to figure out how to handle a half pound hot dog.  No, instead I am referring to the fact that there is a live chicken on the field with the Cleveland Indians while they are shagging balls.

So where did this McNugget in the making come from? No one seems to want to give up the story.  After reading the story on the TribeVibe blog, it seems no one is willing to give the source of the chicken away.  Justin Masterson is very cryptic when he explains “I got the chicken from the father of a friend of a friend” while Chris Perez indicated that the chicken was Cody Allen’s.  Still, others have speculated that the chicken is just named Cody while others think it was a gift.

So, to shorten that up, there is a live chicken on the field and no one will tell where it came from.  If you are a Cleveland Indians fan or a fan of cinematic masterpieces in general, you are probably asking yourself one question right now.

Are the Cleveland Indians going to sacrifice a live chicken? 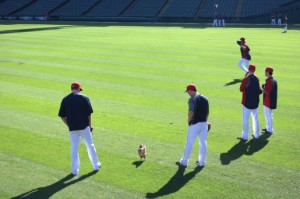 Probably not, no, but it would be a lot cooler if they did.  For those of you who don’t get the reference, I will explain. Even though I shouldn’t because I would only explain something to a friend and anyone who doesn’t get a Major League reference is clearly the enemy.  Outfielder Pedro Cerrano (Played by Dennis Haysbert aka the president on 24 aka the All-State guy) was practicing Voodoo and asked that a live chicken be sacrificed before an important game.  The team decided to get a bucket of KFC original recipe instead and it almost proved fatal for the teams chances at winning.

So clearly, the Indians are doing as much as they can to better their odds of catching the Detroit Tigers for the Al Central crown or at the very least a Wild Card birth.  If they think this chicken is going to help them, more power to them.  I think it’s great that with such critical games coming up that manager Tito Francona has his boys loose and ready to play.

Hope they don’t end up killing Cody, though.