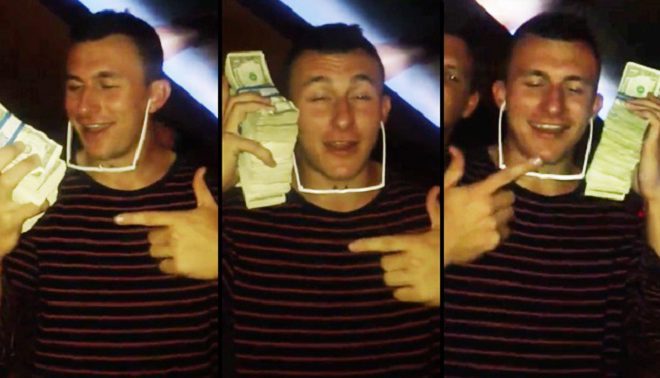 Colleen Crowley Releases All of Johnny Manziel’s Demons with Stories of Abuse, Addiction and Rehab

If you’ve had your finger on the pulse of the sporting world for the last five or six years, you undoubtedly know about the trials and tribulations of Johnny Manziel. From prodigy to punchline, his rise and fall story is one that many of the young athletes at the NFL combine should not only be cognizant of, but also be wary of.

While with the Cleveland Browns, Johnny Manziel was both loved and hated. The same can be said by, and about, his girlfriend at the time, Colleen Crowley. The two, after a day of drinking in October 2015, got into an altercation while driving and she alleged that Manziel had assaulted her in the car.

Crowley, who was 23 at the time, first told officers that Manziel had “hit her a couple times” and “shoved her head into a window,” according to a police report. But minutes later, as she recalled to The Post, her “protective instincts” kicked in. “Your instinct is to be like, ‘What do we need to do — what do I need to say — to get him out of this?’ I constantly felt like I had to protect him.”

This may have been the tipping point for Manziel’s career in Cleveland. But in reality, it should have been a turning point in his life. This should, or could, be the point where Manziel needed to step back and evaluate his life decisions. Checking into one of the many great Ohio rehabilitation centers like The Recovery Village in Columbus could have helped halt this pattern of abuse to both his body and others.

However, it wasn’t the tipping — or turning — point for him. It was more like a stumble. Manziel had tried a rehab center in Pennsylvania earlier in 2015. He moved out of the downtown area of Cleveland to the less hustle and bustle suburb of Avon. Crowley even moved in with him.

The plan worked at first. After a quiet summer, Manziel’s performance spiked at the start of the 2015 season. “Johnny Football is back and better than ever,” The Post wrote after the Browns’ first preseason game against the Redskins, when he completed 7 of 11 attempts for 42 yards.

Crowley recalled how Manziel, now 25, “was in a good place after rehab.” He bought her a French bulldog, Ollie, and the two were “Netflix and chillin’ every night, cooking dinner. We were homebodies.”

This is the type of support system that is needed when someone returns home from rehabilitation. However, some people require more work and a longer stay. Manziel may have been one of these people. In fact, the move from Texas to Ohio was tough on Crowley too. While she was meant to be his support system and keep an eye on him, no one was there for her. It became a powder keg that blew up in October 2015.

“Crowley admits that the two had been drinking the day of their October 2015 domestic dispute and said that she was intoxicated, but Manziel, who was driving, had “probably a little more than two drinks. Not wasted. He wasn’t out of his mind.”

Unfortunately, the rest of Crowley’s story can be used as a warning to people who think that once they go to rehab, they are cured.

“[My friends] wanted to go, and he wouldn’t let me,” she said. “As soon as they left, I basically said ‘I’m not sleeping in this bed with you’ — and that’s when all hell broke loose.”The next night, she was out with friends in Dallas when he asked her to meet him at Hotel ZaZa for an “after-party” in his room. Crowley, who had had “maybe two drinks, tops,” that night, said Manziel did not seem significantly intoxicated when she and two pals showed up at the hotel around 2 a.m.

According to Crowley’s written statement to Dallas police, Manziel “restrained” her and led her downstairs, where he forced her into his car. Then he drove to a bar where her car was parked and the two switched vehicles “against my will,” according to Crowley. As Manziel was backing out, she “jumped from the car.” He “grabbed me by my hair and threw me back into the car,” according to the statement, then “hit me with his open hand on my left ear.”

Crowley told The Post the blow made her “completely deaf in one ear for three and a half months.”

On the drive to her apartment, Manziel threatened to kill them both, Crowley said, and was laughing and crying simultaneously.

“I think there was some mental breakdown because the way he was acting, it wasn’t anything like drugs or alcohol would affect a person,” she said. “This was more deep-rooted.”

Back at her apartment, the arguing continued until after 5 a.m. when Manziel discovered she had been trying to call her parents.

“Out of fear for my life, I pulled a knife out of my knife block and advanced toward him,” she said. “He ran out of the apartment.”

A neighbor who heard Crowley screaming called 911. When police arrived, Crowley, according to reports, became “uncooperative” and refused to answer many questions. A week later, she filed a written complaint with Dallas police, and a judge ordered Manziel to stay away from her for two years.

“I was lucky to have survived,” Crowley told The Post. “I fought for my life that night.”

Manziel has since seemingly seen the error of his ways. He claims he is in a better place and managing his new, diagnosed, bi-polar disorder. He is engaged and is attempting to make a comeback in the NFL.

If you are in an abusive relationship please seek help. If you or a loved one is experiencing dependency issues, please know that help exists to save you. The first step is reaching out.

Please follow and like us:
Related ItemsabusedependancyJohnny ManzielNFL
← Previous Story How To Combine A Passion For Sports With A Love Of Travel
Next Story → The Most Awaited Sports Events Of 2018