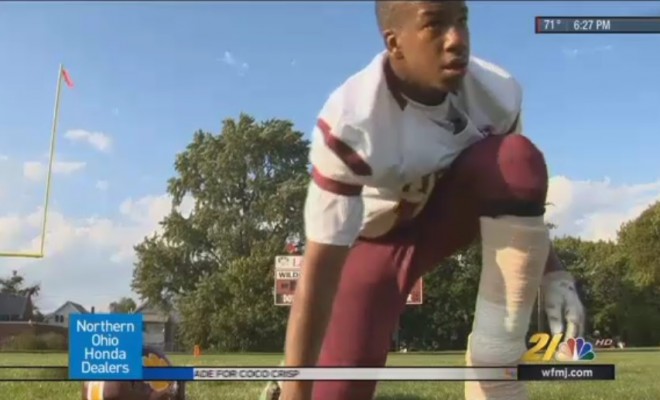 Damon Hodges, the 16-year-old sophomore from Liberty High School (Oh.) is inspiring a lot of people.

Hodges was born without fully developed legs and feet as a result of the umbilical cord being wrapped around his legs. This complication led to the amputation of both of his legs below the knee at only 2-years-old. A lot believed that Damon would never walk again, but it’s safe to say those naysayers are dining on crow now a days.

Hodges is now a varsity football player. At 6′-3″, 165 lbs, he has the size — and now the mobility — to play defensive end. He is able to play thanks to two carbon graphite prostheses that the Ohio High School Athletic Association had to approve.

Beyond the football field, Hodges is inspiring a lot of people. From coaches to teachers to teammates, everyone seems to be in awe of him. His coach, Chet Allen, says Hodges is the most popular player on the team.

“I want our players to do things the right way and I have never had a player want something as bad as Damon when it comes to his desire to play football. He understood what he needed to do academically in order to realize his dream, then went out and made that dream come true. He’s a hard worker, has the heart and now he’s developing a football sense.”

Damon ended up breaking one of his prosthesis during practice on Monday, but they are making sure he will have a new one in time for the game tonight.

Check out the video below or read this article to learn more about this incredible kid.

Please follow and like us:
Related ItemsFootballHigh School Footballliberty leopardsYoungstown
← Previous Story Ahead Of Your Draft, Make Sure You Know Your Fantasy Football Do’s And Don’t’s
Next Story → The Bid to Reduce Kickoff Returns Fails During Preseason as the NFL Awaits Regular Season