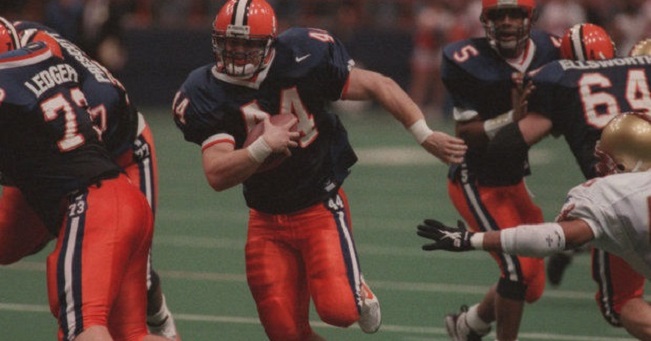 Back in 1999 Jimmy Johnson didn’t do much right as Dolphins Head Coach.  One thing he did do correct was draft Rob Konrad, out of Syracuse, with a 2nd round pick. While at the time, it seemed a little high to draft a full back with the 43rd pick, over the next 5 years Konrad was a complete stud for what were some pretty underachieving Dolphins teams.

Konrad retired in 2004, but apparently he hasn’t let himself go and has stayed in great shape. News came this week that he swam nine miles after falling out of his boat.

‘According to US Coast Guard, Konrad fell in to the Atlantic Ocean on Wednesday and only survived because he was able to swim the 9 miles to shore.  Konrad was picked up at 4:40AM on Thursday and taken to the hospital to be treated for hypothermia.

Konrad had been fishing by himself when he fell in the ocean.  According to the Coast Guard, Konrad’s boat was on cruise control when he went overboard, so the boat continued on its predetermined route.’

Glad to hear Rob is OK after his nine mile swim that, according to the report, took him nine hours to complete. Also, other reports claim Konrad was found on the beach in his underwear.  I don’t know if he had stripped his clothes while in the water to become more sleek like Michael Phelps to swim faster, or if he was fishing on the boat half naked.  Either way, if true, this news only makes the story that much more bad ass.

No word has been given on the destination or current location of the Ghost Riding boat, but I will just assume that it has found One Eyed Willie’s boat from The Goonies and started some sort of ghost ship armada.