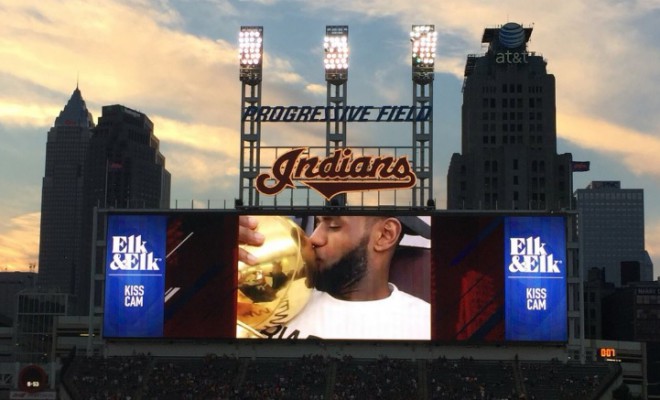 On Sunday night, Cleveland finally got it’s first professional world championship in 52 years and on Monday night, their neighbors showed them a little love.

Next door to Quicken Loans Arena at Progressive Field, the Cleveland Indians beat the Tampa Bay Rays for their fourth consecutive victory — and ninth straight home win — and showed the stadium staple “Kiss Cam” between innings.

The crowd went crazy when they interrupted fans making out to show LeBron James smooching the NBA Championship Trophy.

.@KingJames and Larry made the kiss cam at the @Indians game tonight!! #RollTribe #ALLin216  #Believeland pic.twitter.com/1oM1NPUgo4

The parade to celebrate the Cleveland Cavaliers NBA Championship is scheduled for Wednesday at 11am in downtown Cleveland.

Please follow and like us:
Related ItemsCleveland CavaliersCleveland IndiansMLBNBAWorld Champions
← Previous Story JR Smith’s Daughter Is Proud Of Her Dad ‘For Not Getting Kicked Off The Team’
Next Story → Mike Napoli’s Game Winning Moon Shot Got A Great Call From Tom Hamilton