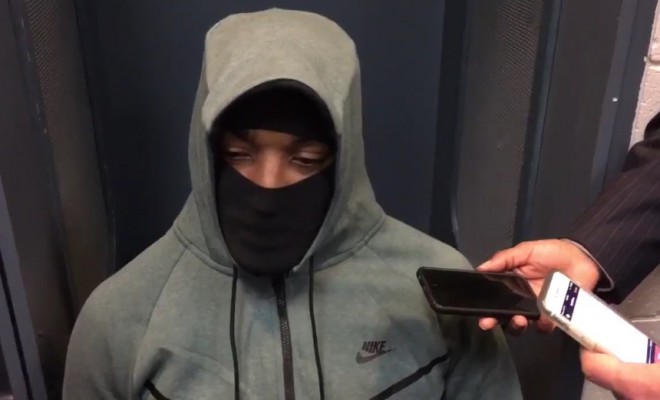 J.R. Smith Didn’t Know He Was In The Game When He Walked Off The Court

J.R. Smith is an NBA veteran and as such, knows a lot of players in the NBA. One of which would be Milwaukee Bucks guard Jason Terry. Smith decided to go say what’s up to his friend last night during the Cavaliers game. The only problem was that play had resumed out of a timeout and the ball was live.

That didn’t stop Swish, though.

While the Cavaliers (13-3) lost to the Bucks 118-101, the real story here is J.R. Smith in the postgame interview…Wearing a ski mask. When asked why he would walk off the court to go say hi to Jason Terry, J.R. Smith had the most J.R. Smith response ever.

Please follow and like us:
Related ItemsCleveland CavaliersJR SmithNBA
← Previous Story The Best Advice You’ll Ever Hear On The Subject Of Golf From The Greats
Next Story → Top Sports To Try In 2017