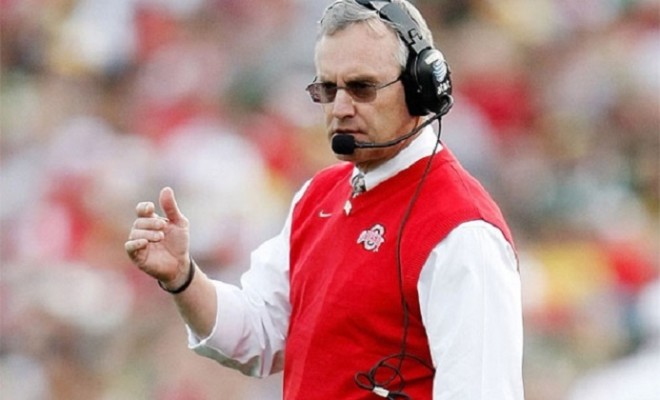 Jim Tressel may have known about violations in April 2010

Ohio State University fans used to be worried about he 2011 season, now they might have to worry about the 2010 season. Reports coming from Yahoo! Sports are saying that an unnamed source is claiming that head coach Jim Tressel knew of his players violations as early as April 2010.

In December 2010, the NCAA alerted the university that some of their players were selling memorabilia to a local tatto artist, Edward Rife. Athletic Director Gene Smith and head coach Jim Tressel complied with the NCAA and their investigation and stood behind the NCAA punishment of the players. Terrelle Pryor, Daniel Herron, DeVier Posey, Mike Adams and Solomon Thomas all were suspended for the first 5 games of the 2011 season.

It seemed as though the storm had blown over after the Sugar Bowl was done with but now with the new reports, a new storm is on the horizon. If Jim Tressel is found to have known about the violations his players were committing and did not bring it to the attention of the university or the NCAA, Ohio State is in more trouble than initially thought. If Tressel knew of the violations in April and reporting them to the NCAA, the five players would have faced a similar penalty where they may have been suspended for the first 5 games of the 2010 season. Since it was not reported, the players were not suspended, which is all fine unless Tressel knew about it in the first place. This would mean that Ohio State played with ineligible players and have to vacate the entire 2010 season, including the Sugar Bowl victory and the share of the Big Ten title.

The team would not be the only party suffering in this entire ordeal. If Tressel is found guilty of not reporting, the head coach might be looking for other employment. According to CBS Sports, section 5.1 of Tressels contract with the university states that failure to report “any violations” could lead to “termination by Ohio State for cause.”. Although it is unlikely that this will come to that, it still has to be put into the discussion.

The Ohio State haters known as Michigan fans should be able to be heard laughing. This might be the biggest dose of karma ever served to one fan base. We all remember the shit we took on the University of Michigan after Dick Rod faced violations for not maintaining an environment of compliance and now we are stuck in the middle of something similar, probably worse.

Look back though and pay attention to every single word in bold. You see what I did there? Everyone, haters and fans of OSU, have to remember that this whole story is based on a unnamed source. There is not a whole lot of credibility in an unnamed source, but then again I have seen ESPN and Yahoo! run with a story on less of a foundation. So really, I am not surprised that they are making a big deal out of something with no backing, but I digress.

There is one more thing.

What if he didn’t know?  Everyone that isn’t an Ohio State fan will not even entertain the idea that Tressel didn’t know and will still believe he did know even if he is found innocent.  But that’s ok, that is a haters job after all.  But If Tressel did not know about this, do you think we will ever find out who the “source” was?