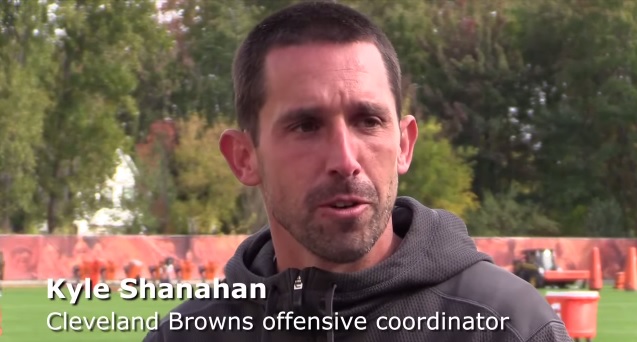 Kyle Shanahan, Browns Will Part Ways After One Season

It was reported yesterday by Cleveland.com that offensive coordinator Kyle Shanahan had grown tired of the front office of the Cleveland Browns. Also, he seems to want to get back together with his father, Mike, for another NFL team. According to reports, the Buffalo Bills, San Francisco 49ers and Oakland Raiders would consider hiring the father-son combo.

The most interesting part of the report, though, was this piece of information. We can all assume this is one of the reasons Shanahan wanted out of Cleveland.

Cleveland.com reported one source as saying some coaches became angered when play calls were recently requested or suggested via text from the press box by a high-ranking non-coaching staff member.

That wouldn’t surprise many. Owner Jimmy Haslam and GM Ray Farmer seem like the type of people that would most definitely text their coaching staff with plays, don’t they?

This morning, it all came to a head when Plain Dealer beat reporter Mary Kay Cabot tweeted that Kyle Shanahan was done in Cleveland.

#Browns OC Kyle Shanahan has talked to Browns owner Jimmy Haslam and they are parting ways after only one season, source says

After it became clear that #Browns Shanahan wanted out, he sat down with Jimmy Haslam and they parted ways.

#Seahawks DQuinn wants to hire KShanahan as his OC if he gets job, Quinn's a top candidate, Shanahan also interviewing for #Bills top job

The revolving door in Cleveland continues to spin out of control.