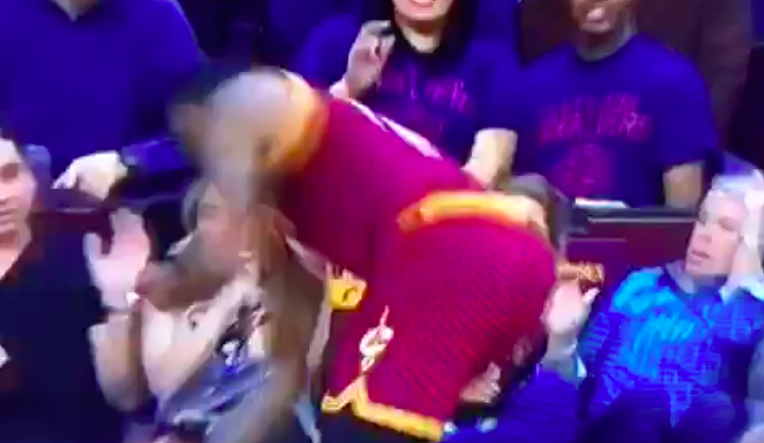 Toward the end of the fourth quarter on Thursday night, Cleveland Cavaliers’ LeBron James dove for a ball heading out of bounds. The ball ended up in the hand of the Oklahoma City Thunder and a bucket for the bad guys, but more concern was back court side.

When LeBron James dove for the ball he absolutely crushed a woman sitting court side who didn’t have time to brace herself. The woman turned out to be professional golfer Jason Day’s wife, Ellie Harvey.

Time was called while medics attended to Harvey, who was awake and corresponding. They ended up putting her on a gurney and taking her out of the arena for further medical attention.

Jason Day's wife, Ellie Harvey, has been taken off the court on a stretcher with her head stabilized in a brace.

Hopefully they took her out as a precaution and everything is OK. Apparently, their kids may have been in attendance too, which had to be awful for them to see.

Best place to stay in Cleveland for a Cavs game? With kids… And go! Thank you 🙂

Please follow and like us:
Related ItemsChristmas GiftsCleveland CavaliersInformationLeBron JamesNBAPGA
← Previous Story The Reactions From Both Corners To Conor McGregor’s KO Of Jose Aldo Are Priceless
Next Story → No One Has Ever Been More Excited For A Photobomb Than Ryan Fitzpatrick