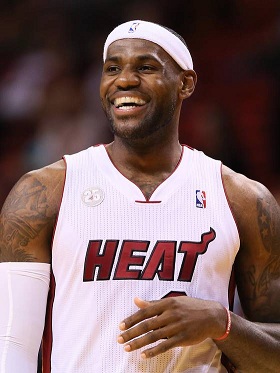 Being a Cleveland fan and living in Northeast Ohio, I was given the opportunity to see LeBron James and his pregame escapades more than the average fan.  From the first time I saw him play live when he was 16 to watching him play at The Q with the Cavs, he has always had a pregame warm up that would nab him the trophy at the Slam Dunk Contest, no problem.  Of course, we know by now that the probability of seeing LBJ in the Slam Dunk Contest is about the same as me getting the cover of the Sports Illustrated Swimsuit Issue.  The only difference between LBJ dunking in high school and dunking in the pros is, because of Ohio High School Athletic Association rules, he wasn’t allowed to touch the rim during pregame.  It didn’t stop him from being a beast though.  Below is a video from this week in Miami when LeBron continued to put on his show.

For the record, I am a Cleveland fan and I am completely indifferent when it comes to LeBron.  He is a beast and I could only hope he comes back to Cleveland.  If he doesn’t, oh well.  Either way, I’m over what he did.  I’ve moved on.