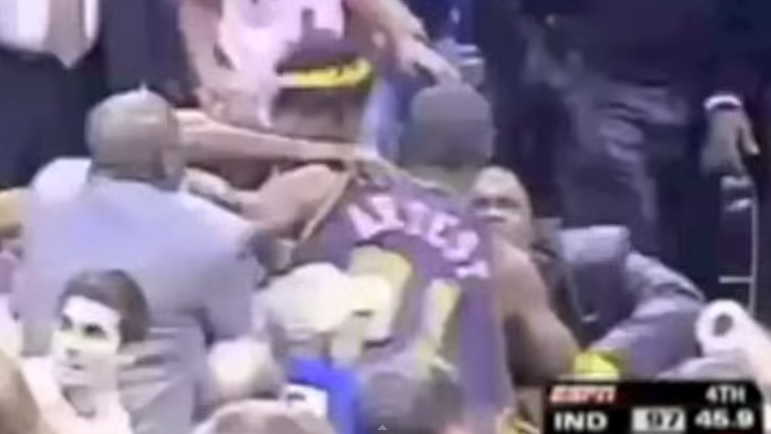 Malice In The Palace: The 10 Year Anniversary Of The Pacers-Pistons Brawl

Ten years ago, then Indiana Pacers Ron Artest and Stephen Jackson crossed a line no one would ever have thought was possible. They entered the stands at The Palace at Auburn Hills in Auburn Hills, Michigan and fought the fans.

After fouling Detroit Pistons’ Ben Wallace, Artest was shoved by Wallace which quickly escalated. Jackson challenged many of the Pistons but ultimately, Rasheed Wallace calmed things down. Or so we thought.

As Artest lay on the scorers table, being kept away from the scuffle, a Pistons fan threw a drink at him. Artest went off the handle and entered the crowd and the fists started flying. Stephen Jackson wasn’t far behind him.

The melee in the stands resulted in nine players being suspended a total of 146 games and the fans involved were banned for life from Pistons games.

Ron Artest was suspended the remainder of the season which, after the Pacers made the playoffs, turned out to be 86 games. Stephen Jackson received a 30 game suspension while Jermaine O’Neal, who punched a fan as well, received 15 games.