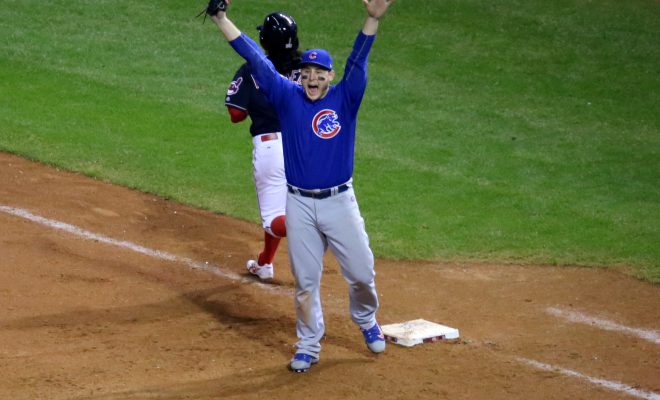 Let’s be honest for a moment: the only guarantee for the World Series this year is the fact that it can’t possibly get any better than the 2016 Fall Classic. The drama of two historically bad franchises competing to break streaks of futility, all the way into extra innings of game seven – which included a rain delay – will be impossible to match. Overcoming a 3-1 deficit to win the World Series probably won’t happen for a while either. But that doesn’t mean the 2017 World Series will end up being dull.

Instead, fans can look forward to another season of fantastic baseball which includes several top-tier contenders. MLB World Series futures begin to solidify as everyone gets a chance to measure how Major League rosters round into form. Some teams are trending up in the eyes of baseball bettors while other squads lose respect as potential contenders. Anything can happen in a 162-game season, but the following teams appear primed to fulfill their potential as favorites and dark horses, or have been given odds that don’t match the challenges they face against superior MLB squads.

Cleveland was infuriatingly close to ending their own 68-year championship curse, but instead fell victim to the miraculous post-season run which ended the Chicago Cubs historic, 108-year World Series drought. In the offseason, they upgraded the heart of the batting order with Edwin Encarnacion, and shored up their relief pitching situation by signing lefthander Boone Logan. They achieved their post-season run without the services of players such as Carlos Carrasco and Michael Brantley, upgrading the lineup through improved health.

Sure, Cleveland won’t swipe bases like the Kenny Lofton days, and the exit of Davis slows them on the paths, but the addition of one of the most feared power hitters in the AL should be the offensive boost needed to ease the path to the World Series. The pitching’s already there, and an entire season with Andrew Miller will allow the staff to settle into the rhythm of their expected roles. This team’s built for playoff success more than any other franchise in the American League, and gained hard experience of what it takes to win a World Series. Barring catastrophe, Cleveland should be considered the favorites to repeat as A.L. champs.

Hard to believe that we now live in a universe which doesn’t feature the Chicago Cubs as the pro franchise with the longest championship losing streak on the globe. The magic of the 2016 World Series means that the Cubs can no longer be called lovable losers. If anything, their ability to overcome the historic curse and a 3-1 deficit places them in an ideal position to become the first team to repeat since the Evil Empire at the turn of the century.

The Cubs’ rise to newfound greatness was largely a product of club management. Team president Theo Epstein, general manager Jed Hoyer, and manager Joe Maddon combined to assemble and lead one of the strongest cores in baseball. Most of the key contributors to the Cubs World Series run will remain under contract or outside of arbitration for a few years, creating the opportunity to contend for the next half-decade at minimum. Considering the strength and stability of the team, the Cubs should be considered favorites to repeat, with Cleveland remaining as the team most likely to stand up to the best squad in the MLB.

Last year, the New York Mets were clobbered by injuries for most of the campaign, but still managed to put together a strong season which resulted in a wild card playoff berth. The main draw for the Mets remains their incredible starting staff, which includes Harvey, deGrom and star fireballer Noah Syndergaard. If starters and main offensive contributors manage to stay healthy, the Metropolitans should be considered the top dark horse candidate to upset the Cubs in the National League.

The team had an awful offensive season during 2016, but unless another mass regression takes place, the Mets should enjoy more consistent run production throughout the 2017 season. At peak performance, New York’s stable of starters could steal enough games to win a series against any team in the MLB. A slight uptick in offense along with untouchable starters would make New York as dangerous as any other squad in The Big Show.

Don’t mistake the Blue Jays for a bad team – on paper, they’re still one of the hardest hitting teams in the MLB. Starters Aaron Sanchez, J.A. Happ, Marcus Stroman and Marco Estrada should pitch about as well as they did last year, and Francesco Liriano should be able to eat about 150 innings to soften the path to a wild card opportunity. However, the fact that the Jays haven’t been able to gain traction against the Kansas City Royals or the Cleveland Indians in the ALCS suggests that they would need improvements to make it to the World Series for the first time since 1993.

Incredibly, Jays management decided to mess around with Edwin Encarnacion during contract negotiations, alienating this fan favorite and locker room leader. As a result, Cleveland has replaced Mike Napoli with Edwing, plugging 35+ homers and 100+ RBI into an already deep lineup. The starting pitching ended up surprising pundits last year, and Toronto needed to support their starters by acquiring some help on relief. Instead, they lost Brett Cecil and Joaquin Benoit, key set-up men. Bullpen issues and a slightly less effective offense suggest that the Jays haven’t improved, making another long post-season run an unlikely event.

The Houston Astros will most certainly be a top offense in Major League Baseball given all the talent in the lineup. They’ve made a series of upgrades, welcoming Carlos Beltran, Brian McCann and Josh Reddick to the fold. For most of the season, the Astros will get away with bludgeoning their opponents into submission, taking advantage of timid regular season pitching to great effect.

Unfortunately, the main issue that the Astros have faced over the past couple of years has been their starting rotation, which isn’t as effective as other competitors within reach of the Fall Classic. When the playoffs arrive, the Astros won’t be able to rely on the long ball, requiring other ways to find wins. Sure, one of their young arms might end up maturing quickly, but Houston will be hard-pressed to overcome American League foes like the Indians and Red Sox.

Madison Bumgarner is the type of starting pitcher who always gives his team a chance to win any seven game playoff series, as long as he has the chance to take over three out of those seven games. Get the Giants in the post season and anything can happen, which is why it’s odd that San Francisco didn’t make too much of a splash during the offseason, other than solidifying their closer situation by picking up Mark Melancon.

Given the excellence of the Cubs, and the return to health for key Los Angeles Dodgers pitchers, San Francisco faces an uphill battle to stay in contention for a playoff berth, never mind making the World Series. If management decides to recruit reinforcements, there’s a chance that the Giants will represent a serious problem for the Mets, Dodgers and Cubs. Without further improvement, San Francisco will fall short of another World Series ring.

Related ItemsBaseballchicago cubCleveland IndiansMLBNew York MetsSports
← Previous Story Here’s Everything You Need To Know About The 2017 Sydney Autumn Carnival
Next Story → The Cubs and Wildcats Turn It Around In The Same Year, It’s Such A Treat