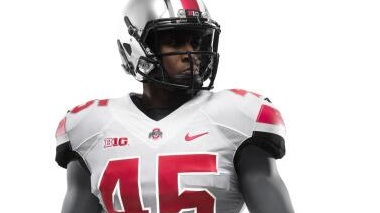 Two big pieces of news regarding the Ohio State vs Michigan rivalry game, lovingly referred to by many as “The Game”, were given to us this morning. The first news was that the game would kickoff at noon November 30th.  Each year, we are forced to wait to make plans as the Universities and other powers that be decide when the game will start.  It is never going to be a night game because of the tailgating and alcohol consumption involved.  A night game would be a death wish.  So usually we have a noon or 3:30 kick off.  This year, we have been awarded the former, so plan accordingly.

The second chunk of news dropped on the Buckeye faithful today was that they will, as in years past, wear an alternate uniform for “The Game”.  Much like last year, they will have the grey metallic helmet with the wide stripes down the middle and the jersey style seems to be roughly the same as the jerseys from last year too.  New this year, though, is the color scheme.  Ohio State will be rocking all white uniforms when they take the field in Ann Arbor.

According to @OhioStAthletics, the Buckeyes will wear all white uniforms vs Michigan. pic.twitter.com/d5JXSAMRIR

Personally, I like them.  I like them more than last years alternates.  I am a big fan of the plain style.  Be it all black or all white, there is just something about it that I love.

Please follow and like us:
Related ItemsBuckeyesOhio State UniversityPro CombatUniforms
← Previous Story Youngstown State Got Posterized at the Hands of Raphiael Putney of UMass
Next Story → Cleveland Browns Toughest Test Wasn’t the Bengals on Sunday, It was Getting Home Safely