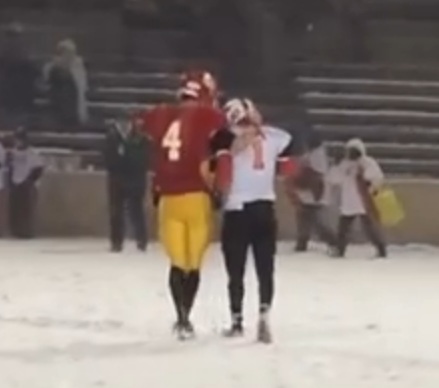 On Monday night, the Sharon High School (PA) Tigers suited up for their PIAA Class AA playoff game against the Girard High School (PA) Yellow Jackets.  The problem was, this game was supposed to be played the Saturday before. The game had been postponed after a car accident on Friday night claimed the lives of two of their teammates, Corey Swartz and Evan Gill, and put two other teammates, twin brothers Greg and Craig Osmon, in the hospital.

The crash also claimed the life of John Zdelar Jr., 50, who was driving a truck that Corey Swartz struck when he crossed the median with his passengers.  Also in Zdelar’s truck were two young boys. Evan Wallace, 10, was taken to a Pittsburgh hospital while Blake Yenderak, 12, was released after getting medical treatment.

With heavy hearts, the victims families were “adamant” that they play this playoff game and after a team vote, they decided to do just that.

Despite the snowy conditions, things looked to finally be moving in the Tigers direction as they took the lead late in the third quarter, 19-14.  However, with just 13 seconds left in the game, the Yellow Jackets quarterback Joe Dunn connected with his receiver for a 22 yard strike that would put them up 22-19 after a two point conversion.

There simply wasn’t enough time for the Sharon Tigers to mount a comeback but you would be hard pressed to find a person who would tell you their fallen teammates wouldn’t be proud of their brothers.  Struck with emotion, Sharon wide receiver Trenton Mosley was slow to get up after the game but got a helping hand from someone unexpected.

“To see that kid in tears after a game like that, honestly it brought me to tears, and I don’t even know the kid,” Dunn said afterward. “The fact that something like that would to a team, a family that came together throughout the year so strongly, I knew I had to walk over to him and let him know they had some heart coming out to play today. It was honestly one of the saddest moments of my life.”