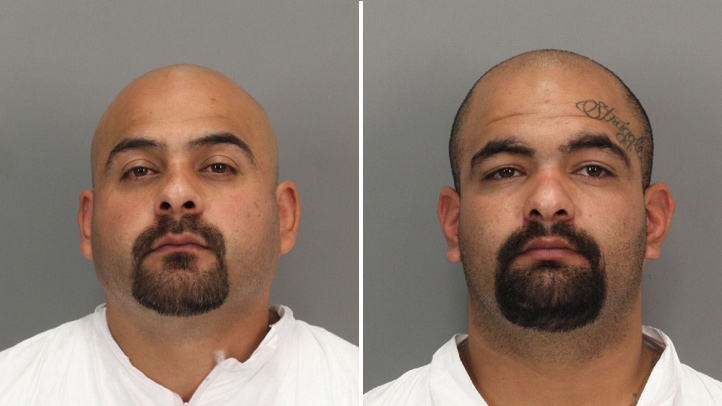 Last Sunday at Levi’s Stadium, two fans were savagely beaten in the men’s restroom during the San Francisco 49ers game. One of the men was treated and released from the hospital while the other remains in critical condition with his brain bleeding. According to a ABC report, the second man has had to undergo surgery to remove part of his skull and he is suffering some paralysis.

The motive behind the attack is still under investigation and the video below doesn’t show much of a confrontation before the punches started flying.

The two attackers have been identified as Dario Rebollero and Amador Rebollero and they are currently being held with bail at $75,000 and $350,000, respectively. There is no word on whether or not there was an increase in bail because of the insanely stupid “Struggle” tattoo Amador has on his face. His face.

According to the Santa Clara Deputy District Attorney Deborah Hernandez on Wednesday, the whole fight started when one of the victims tapped Amador, letting him know there was a urinal open. Then all hell broke loose.

“This was caused by a mere tapping of the shoulder to let the defendant, Amador Robellero, know that there was a vacant stall,” Hernandez said. “These are two individuals just standing at the bathroom waiting their turn, trying to make the line move.”

This is just the latest report of brutal fan fights in California, which seem to be coming more and more frequently.

Just last week, outside of Angels Stadium in Anaheim, a former LAPD police officer and Marine veteran was left unconscious after being beaten by three men. The unprovoked attack happened after the Angels fell to the Royals 4-1. The man, Alex Arredondo, has been upgraded from critical to serious condition at the hospital but is still unable to speak with law enforcement about the incident.

Last year, outside of San Francisco Giants’ AT&T Stadium after a game against the Los Angeles Dodgers, a fight involving fans of each team occurred. It ended with a Dodgers fan, Jonathan Denver, dead from stab wounds from Giants fan Michael Montgomery. Montgomery was eventually not charged with a crime because it was determined he was acting in self-defense.

During the 2013 season, outside of Qualcomm Stadium in San Diego, Chargers and Cowboys fans got into it. First, a Cowboys fan got not one, but two bottles smashed over his head/face. Then, as a Chargers fan — who is exponentially smaller than the other — was trying to stop the fight and got a bottle smashed across his face.

Perhaps the most notable from the media coverage standpoint would have to be the brutal beating of Bryan Stow outside Dodgers stadium in 2011. Stow was wearing his San Francisco Giants jersey and jawing at people in the parking lot when two men engaged and beat him badly. The 45-year-old father was left with disabling brain damage that has him in a wheel chair and requiring around the clock care.

The Rebollero brothers, the above mentioned men responsible for beating the two San Francisco fans, have been charged with felony assault with intent to commit great bodily harm.