Tom Brady relaxed a bit and hit the links on Super Bowl Sunday.  Instead of getting prepared for the biggest game of the season, he was trying his best to find his ball in the rough.  If you remember, the Patriots got their asses handed to them by the eventual Super Bowl Champion Baltimore Ravens a couple weeks ago.

Since Tom’s $20 million mansion is now complete, I suspect the 35 year old quarterback will be spending the cool winter months on the left coast with his smoking hot Brazilian import, Gisele Bundchen and their brood.  Their house has been in the news as of late, not so much because of the price tag, but because it has a moat.  Why wouldn’t it?

When I see pictures of Tom Brady not in his uniform, I get the overwhelming feeling that Gisele dresses him like he is her dolly. 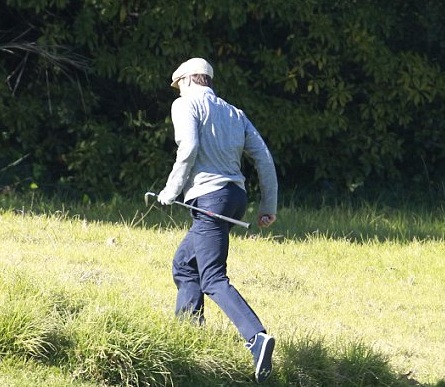