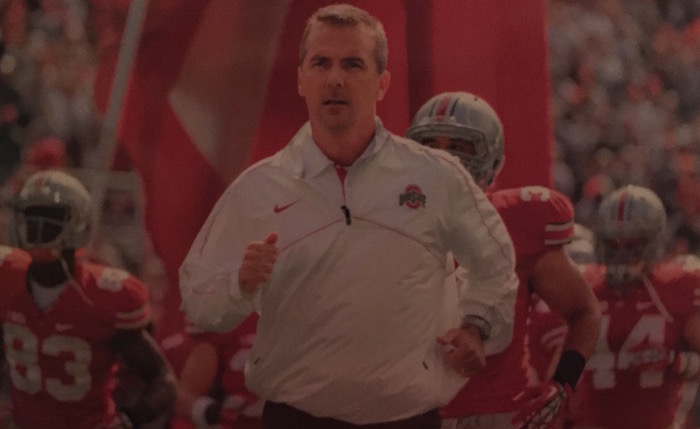 Above The Line | Penguin Publishing

Urban Meyer Made Tom Herman Learn His Offense In An Hour, Then ‘Teach It To Him’

Urban Meyer has a methodic way of doing things. Its seems after such a storied career, the coach has finally figured out the way to balance everything in his life. In his new book, Above The Line, he gives a blueprint of sorts as to how he turned his 2014 Ohio State Buckeyes into the first ever College Football Playoff National Champions.

Along the way, we picked up some view points and stories from his years as a head coach. For instance, when he got to Ohio State he was interviewing potential offensive coordinators when he happened upon Tom Herman, the man who would shape Braxton Miller, J.T. Barrett and Cardale Jones.

At the time, Herman was the OC and quarterbacks coach for Iowa State. Meyer even admits that Herman wasn’t “the biggest name out there” and if the media and Ohio State fans knew the other candidates, they would have told him he “lost his mind.”

He was taken with how smart and charismatic Herman was. So he did the next logical thing. He tested him.

“Study this. I’ll be back in one hour. Teach it to me,” Meyer told Herman as he handed him the Ohio State playbook.

Not only did Herman oblige, but according to Meyer, he basically taught him his whole offense after studying it for an hour.

That’s insane. But, if you think about it, we really shouldn’t be surprised that Tom Herman — who accepted the head coaching position at the University of Houston — has taken his Cougars to a 7-0 start. The man seems to speak football first, English second.

Meyer touched on a number of other subjects, included him stepping away from his job at University of Florida.

“Near the end of my time at Florida, I had lost thirty-seven pounds and had chest pains and thought I was dying. One night I fell out of bed and sprawled facedown on the floor, my chest feeling as if it were being crushed by an anvil as Shelley, a trained nurse, spoke to a 9-1-1 operator. My friend Randy Walked, the coach at Northwestern and a man I had a great admiration for, had died of a heart attack at age fifty-two just a few years before.

Was I going to be next?”

Ohio State fans will empathize with that quote, while most Florida fans will straight up call bullshit. That’s the nature of the college football beast. To Gator Nation, Meyer simply turned his back on his team and was in cahoots with ESPN and Ohio State to take their upcoming vacancy. You can’t argue with either side on this one, so just don’t try.

Further proof that Meyer was a giant mess at Florida was on display when he immediately retreated to his office after winning the 2009 National Championship so he could text his recruits. That story is pretty much known. But how about another inappropriate time when he decided to text recruits?

“I  used to send text messages during Mass, all the time. I tried to be discreet, but Shelley knew what I was doing and wasn’t happy about it. I am a God-fearing Irish Catholic who has been going to church my whole life, yet in the height of my manaical-pursuit-of-perfection days at Florida, here I was, transacting football business in a pew, tuning out the homily so I could suggest a new short-yardage play to our offensive coordinator, or tell a recruit’s mother why she should entrust her son to me.”

Meyer used these anecdotes — and many, many more — to tell about the changes he made, both personally and professionally, that helped him become a more successful leader and help bring together a team to build the foundation of a championship season.

The lessons in this book revolve a few key principles.

ABOVE THE LINE BEHAVIOR – It’s a simply concept that Urban Meyer will drill into your head in the 250+ pages. Intentional, purposeful, skillful thinking is Above The Line Behavior.

BELOW THE LINE BEHAVIOR – The Yin to the Yang of the Above The Line Behavior. Spouting off, quitting on your team, or being lazy is Below The Behavior. Impulsive, on autopilot, resistant are common behavior traits with this principle.

The concept is simple. Stay Above The Line in whatever it is you do or pursue. It transcends football and Meyer does a good job conveying that.

Overall the book is a good read. It gets a little dry during the middle chapters, but if you stick it out until the end, the last few chapters are worth it. If you’re not an Ohio State fan or an Urban Meyer fan, you may not like it as much. If you are looking to sharpen your leadership skills, Above The Line will offer you some new ways of approaching some situations.

Above The Line: Lessons In Leadership And Life From A Championship Season is available now.