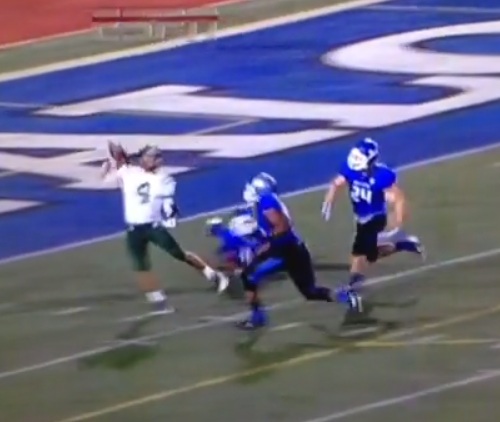 VIDEO: Official Calls Safety On Ohio University Quarterback Who Wasn’t Even Close to the Endzone

Ohio University quarterback Tyler Tettleton brought his team to the line of scrimmage. He scanned and surveyed the defense, then started the play. The Buffalo defense closed in on Tettleton and he scrambled to his right to avoid a sack.  Seeing that no one was open and not wanting to lose more yards, Tettleton threw the ball away.  Unfortunately, the officials called Tettleton for intentional grounding.  In my opinion, it was a bullshit call.  Tettleton was clearly outside of the tackle box and his pass made it past the original line of scrimmage.

But that’s not the argument everyone is having on this beautiful hump day.

In addition to calling Tettleton for intentional grounding, referee Tom McCabe also declared that Tettleton threw the illegal pass from his own endzone, which by rule is a safety.  The problem is he threw it from around the 4 yard line with McCabe standing no more than 5 feet from him.

The play was clearly incorrect but since the spot of the foul could not be reviewed, the call stood.

Ohio University ended up losing to Buffalo 30-3, so the penalty had little outcome on the game.  OU head coach Frank “The Tank” Solich, was more upset with the fact that the play couldn’t be reviewed.