Another year is in the books! Thunder Treats just turned 5 years old and had a fantastic, record-breaking 2013 all thanks to you guys! As a treat to start your year off right, each year we gather the top Hump Day Hotties from the year and pit them against each other. We leave it up to you, Thunder Nation, to decide who is the best of the best. Past winners include Luisana Lopilato in 2010, Melanie Iglesias in 2011 and Shannon Ihrke in 2012.

The crown for this years Hump Day Hottie of the Year will be sitting atop model Monika Pietrasinska! Monika was named Hump Day Hottie back in October and was brought to our attention by @SarMarchese. We love when people send us tips about relatively unknown hotties and it’s even better when a female from Thunder Nation steps up and lets us know we’re dropping the ball.

To take this year’s title, Monika bested HDHOTY finalists Grace Kosmider, Tiffany Habib, Charlotte Springer, Nina Agdal, Leigh Brandt, Scarlet Bouvier and Beth Humphreys. I highly suggest following each of those hotties closely this year. 2014 will prove to be larger than life for each and every one. Write that down. 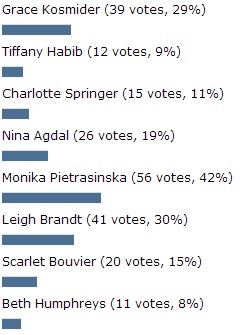 Congratulations to Monika Pietrasinska on winning the 2013 Hump Day Hottie of the Year competition. Enjoy the gallery below and be sure to follow her on Twitter.