After over 2,000 votes were cast, the Hump Day Hottie of the Year competition came down to a battle between two contestants.  Shannon Ihrke, Maxim Hometown Hottie and former Marine and Berenice Marlohe, the Sky Fall bond girl.  Katie Nolan from Guyism.com was in the early running, as was Sara Jean Underwood.  Elisabetta Canalis started out hot but stopped her Twitter campaign for reasons unknown.

In the end though, Shannon and her faithful Twitter followers gave her the push she needed to win the crown of Hump Day Hottie of the Year!  She passed Berenice Marlohe by just 56 votes during the final hours of the contest, earning a whopping 40% of the 2,090 votes. 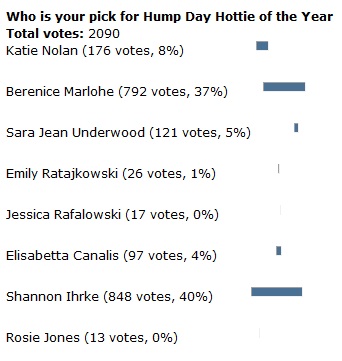 Congrats to all 8 finalist but the biggest congrats goes out to Shannon Ihrke!! Shannon, when you inevitably read this, please email me at dilo@thundertreats.com so I can send you your Thunder Treats Hump Day Hottie tank!!  For the rest of you, please enjoy the photo gallery below.  They are some of my favorites from Shannon’s official website, which I highly suggest you check out! Also be sure to FOLLOW Shannon on Twitter and Facebook!!