The charges stem from an attack the duo laid upon former paramedic from Santa Cruz, Bryan Stow, in 2011. Stow and couple friends traveled to Chavez Ravine to see their San Francisco Giants play the Los Angeles Dodgers and as they were leaving, Stow was jumped from behind by Norwood and Sanchez.

They hit him in the head and knocked him unconscious and continued to kick and punch him while he couldn’t defend himself. Stow’s friends, both paramedics as well, tried to save him but were too late.

“As soon as he was punched, he was unconscious and fell back on his head,” One of Stow’s friends, Corey Maciel testified. “He was unable to brace himself. I saw his head bounce off the concrete. I heard the crack.”

Both Norwood and Sanchez, during secretly recorded jailhouse conversations, admitted to being the two who nearly beat Bryan Stow to death.

“I socked him, jumped him and started beating him,” a transcript of the conversation quoted Sanchez, who also apologized to Norwood for dragging him into the fight.

“That happens, bro,” said Norwood. “I mean, what kind of man would I have been if I hadn’t jumped in and tried to help you.” 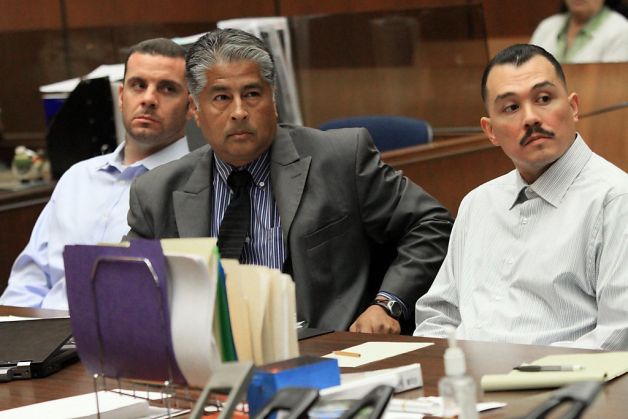 Marvin Norwood (Left) and Louie Sanchez in May 2012 preliminary hearing

Sentencing for the two came after the judge heard the impact statement from the victim. After accepting a plea deal, Norwood will receive four years for felony assault while Sanchez will serve the next eight years behind bars.

Bryan Stow is back at home with his family now after spending two years in hospitals and rehab facilities. He still requires 24 hour care and daily physical therapy. Also, there is a civil suit pending against the Los Angeles Dodgers and former owner Frank McCourt.