California governor Jerry Brown signed a bill this weekend defining “an affirmative, conscious and voluntary agreement to engage in sexual activity” or what it has been dubbed, “yes means yes”.

In an effort to empower and protect women, they are making it a law to consent not only to sex, but to all sexual activity throughout the encounter.

“It is the responsibility of each person involved in the sexual activity to ensure that he or she has the affirmative consent of the other or others to engage in the sexual activity. Lack of protest or resistance does not mean consent, nor does silence mean consent. Affirmative consent must be ongoing throughout a sexual activity and can be revoked at any time. The existence of a dating relationship between the persons involved, or the fact of past sexual relations between them, should never by itself be assumed to be an indicator of consent.”

You might think that a person constantly asking for permission during sex might be a little annoying or may kill the mood. You’re probably right but don’t worry, the University of Wyoming has got you covered!

In their “Consent Is Sexy” brochure, they offer you up some pick up lines to help you get your swerve on. 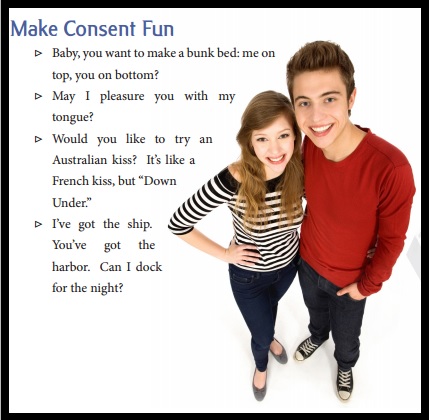 It doesn’t just have to be “Fun”, though. You can make consent “Sexy” too!

Feel free to write these down and keep them in your wallet, next to your expired condom.

And holy shit, I just realized the pun in the headline…