Virginity Auction Over: Catarina Migliorini Sold Her Virginity for $780,000 but the Male Virgin Was Not So High Priced 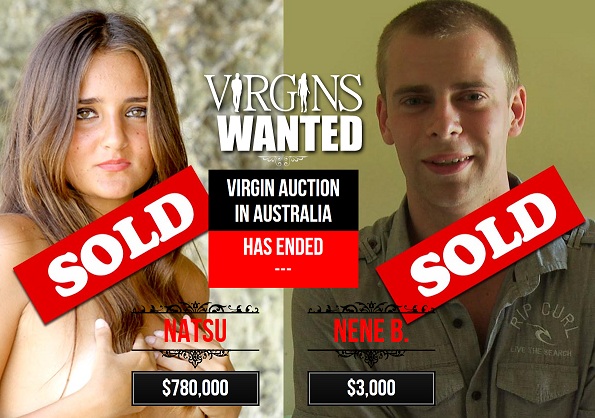 When I first told a girl about this her response was classy and hilarious.

“Wow…I got way less than that”

Well put.  It’s safe to say that we all got less than what Catarina Migliorini is getting for selling for her virginity.  The 20 year old Brazilian babe, along with a male counterpart, have been auctioning off their virginity’s for the past few weeks.  Their goals are to raise money for themselves and to donate to charity (they say).  Catarina might be eating her words after her auction ended with a $780,000 price tag.  The whole process has been filmed and will be made into a documentary soon.

For you YouPorners out there, no, they will not be filming the sex.  The identity of the winning bidder, going by just “Natsu”, will remain anonymous and will not be released to the media.  However, an interview before and after the taking of the v-card will be made available.

Don’t worry female Thunder Nation, there is a man who put his virginity up for grabs to the highest bidder as well!  The male counterpart to Catarina is Alexander Stepanov and he is way more in the middle class range of pricing.  I’m going to go out on a limb here and say that his snaggle tooth and near red hair have something to do with him only netting $3,000.  If not that, perhaps his wack golf game.  Of course, I’m sure he lost some of his bids to Catarina because I am almost positive the majority of women would rather sleep with her than him.

If you just read the above and stroked your chin and thought to yourself,  “hmmm, that sounds a lot like prostitution”, we could be twins.  Catarina, as you would think, doesn’t feel the same way.

“If you only do it once in your life then you are not a prostitute, just like if you take one amazing photograph it does not automatically make you a photographer,” she said. “The auction is just business, I’m a romantic girl at heart and believe in love. But this will make a big difference to my area.”

Catarina clearly doesn’t get what people and the media are saying.  They are not calling her a prostitute outright, they are saying what she, Alex and Virgins Wanted are doing is prostitution.  The fact that she says it’s a “business” deal shows that this girl is thinking of this as a transaction…for services rendered…which are sex.

Prostitution (n) pros·ti·tu·tion – The practice or occupation of engaging in sex with someone for payment.

Stupid (adj.)  stu·pid – Marked by a lack of intelligence or care; foolish or careless

I’d say both of these apply here.