Another Bunbury Music Festival is in the books and we’ve taken a week to digest the three days of performances we got to witness in Cincinnati.

This is the seventh year for the Ohio music festival, with each year getting bigger than the last. The weather, which is usually a crapshoot in Ohio in late May and early June, worked out better than years past. It wasn’t too hot, it wasn’t too cold, it wasn’t too rainy and it wasn’t too sunny. It was just right to have a few drinks and cause some trouble at the Millennium Hotel pool before heading to the gate.

In other words, it was perfect music festival weather.

Friday’s crowd was large. According to PromoWest marketing director Marissa Luther, they sold out the Friday show at 20,000 tickets. This, perhaps, may be the best logistical team in the music festival business because the festival grounds are perfect for 20,000 fans. I’ve been to four Bunbury’s now and I’ve never felt like overcrowding is an issue. 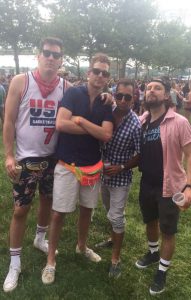 The only hiccup of weather came on Friday night – which may be a reoccurring theme if you’ve been to Bunbury’s past – when it rained for maybe 30 minutes. It didn’t stop The Chainsmokers from playing their entire set at the Nissan Stage. Not surprisingly, they were fantastic. I’ve seen them probably five times and have kind of strayed from them since Drew started singing more, but they always, always deliver.

In addition to The Chainsmokers, Bishop Briggs and Fitz and the Tantrums both gave good reasons to stick the west side of the venue on Friday night as well. Bishop Briggs played a packed CVG River Stage, which is one of the coolest venues of any music festival we have ever been to.

Even without Blink-182, who canceled their Friday performance (and other dates around this same time) due to unforeseen circumstances, Friday was definitely a win for everyone in attendance. It rivaled the Friday night featuring The Killers and Cincinnati Reds fireworks from 2016.

Saturday, after the pool party of course, had us all thrown back a little bit. We got in a little late and caught the end of Misterwives set, which made us sort of regret the length of the pool party. Next up was Third Eye Blind at the Nissan Stage. We had to walk all the way across the venue to see them. And when I say that, think 8-minute walk, if that. Compare that to Lollapalooza in Chicago where main stage to main stage is a mile and I’m not even exaggerating.

Third Eye Blind lead singer Stephan Jenkins let the crowd know early that he had been diagnosed with brochitis and pneumonia earlier in the day and a doctor had given him a steroid shot to help him. However, by the end of his set, Jenkins sounded like he had been run through the wringer. However, no one really seemed to mind as they jammed and sang along to all the hits like “Jumper” and “Graduate”.

Saturday wrapped up with Foster the People, GRiZ and Incubus. I admittedly, kind of fell off the Foster the People bandwagon when they released that hot pile of garbage SupermodelI in 2014. I mean, I wouldn’t even use that album as coaster. However, reluctantly, I gave them a shot and wasn’t completely dissatisfied. I think their Sacred Hearts Club album really has saved their careers. In addition, you know as well as I do that “Helena Beat” and “Houdini” will never get old.

Incubus completed the Throwback Saturday by closing down the festival at the main Nissan Stage. I wasn’t completely over the moon about seeing Incubus, but whatever, it’s a music festival and I love live music. They’re set was solid, but something about it doesn’t scream music festival. I was, however, pleased when I got to hear “Drive” to close it down. I don’t care what you think of me for that statement.

Sunday began with more pool shenanigans, so to the degree that a “hey don’t film this” disclaimer was thrown out once or twice.

Sir Sly was first on the agenda for Sunday at the favorite River Stage spot and what a perfect way to start the day. If you haven’t listened to Sir Sly, think Foster the People, but good.

Kidding. I just wanted another dig at Foster the People.

Sir Sly has an upbeat sounds that reminds me of Fitz and the Tantrums meets CHVRCHES meets Big Data meets Cake. Weird combo, but it works like a charm. Trust me.

Winning dirtiest – probably – artist award would be Post Malone. While I personally think he is a dirtbag wannabe that found his name via a rap name generate (true) and all his songs sound the same and unoriginal, what was I supposed to do? Go watch Jack White? That probably hit some nerves. But I was more than surprised by Post Malone’s performance, which ended on the highest of notes that it could have with “Rockstar”, “white Iverson” and “Congratulations”. He’s not someone I would pay to go see in concert, but I appreciate the fact that I got to see him while at Bunbury.

Which is a really good reason to thank PromoWest for what they’ve accomplished with this music festival. It had growing pains in 2015, but has come a long way. Their eclectic mixes of new, old, upcoming and mega acts is truly remarkable. When I see an act I didn’t really know before (Sir Sly) and an act I’d never opt to go see on my own (Post Malone), I call that a win in every sense of the word.

Looking forward to Bunbury 2019…we already know Blink-182 will be there! First headliner leak!

Special thanks to the goon squad for their input on the festival: