This morning, Lollapalooza made the anticipated lineup announcement that is always met with criticism. No one is ever happy when a lineup is announced. It’s a common theme when a music festival giant like Lollapalooza, or the like, spends months building anticipation leading up to the announcement, only to underwhelm their audience. And it’s not their fault, either. Smaller festivals like Bunbury Music Festival are making it harder for the big name shows to offer shocking and unforeseen headliners for people to drool over. It’s a sort of “festival fatigue” that seems to be leading to lower turnouts and ticket sale decline. For instance, Lollapalooza tickets went on sale yesterday and are still available today. That never used to happen. 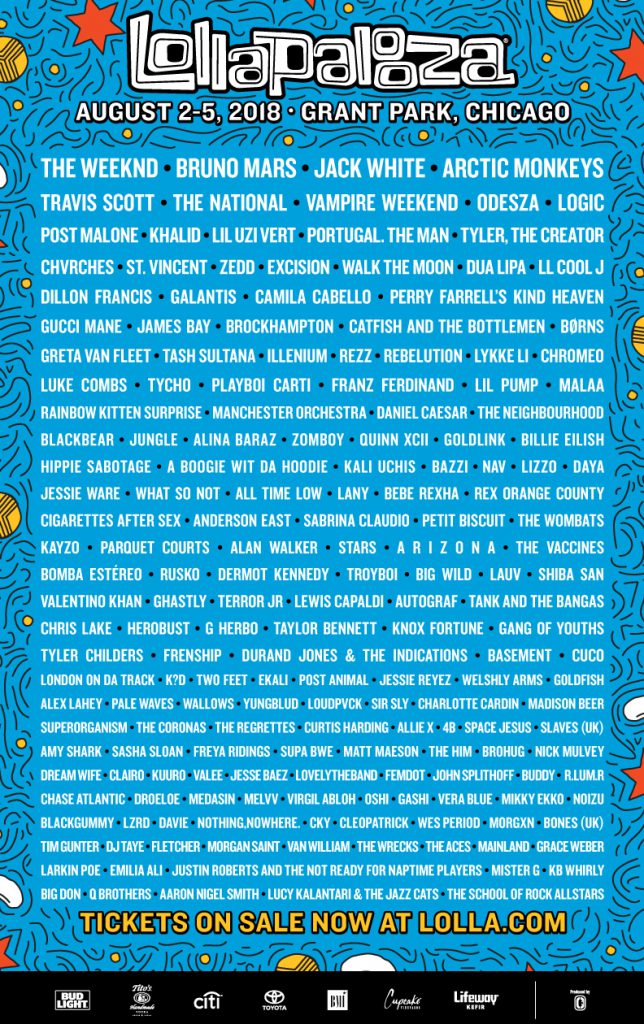 To Lolla’s credit, they’ve got The Weeknd, Jack White, Arctic Monkeys and Bruno Mars headlining their 4-day show. That’s pretty awesome. But ya know what? You can see most of these acts much closer to your home (probably) and a little cheaper too.

The influx of music festivals pushed on people has blown up. Beginning in 2011, I started attending music festivals annually. At that time, there were only really the big names. Lollapalooza, Coachella, Bonnaroo, Ultra, SXSW, ACL, etc. There were some up and comers in the form of GovBall, Outside Lands, Hangout and Firefly, but for the most part the aforementioned were the big timers. As such, the announcements came everyone couple months and the lineups were usually pretty different in both talent and genres.

However, now in 2018, we are set with upwards of 50 (known) festivals throughout the country. This is equal parts good and bad.

The good part about having all these festivals is location, location, location. Currently, I’m residing in Ohio. Being here, just in this state, I have the options for Bunbury Music Festival, Jambo in the Hills, The Numbers Fest and LaureLive. That’s just off the top of my head too. A lot of these festivals, even if they are on the smaller side, will have talent equal to the big names with a fraction of the price on the tickets.

If you want to attend multiple music festivals, prepare for the repeat acts. Not a terrible “bad” part of this, but the fact that all these festivals are having a lot of the same performers at them really removes the excitement of the announcement. Lollapalooza announced their lineup this morning and if no other festival was having Jack White headline, this would have been huge news. But Jack White is making his festival rounds this year, headlining GovBall, Lolla, Shaky Knees, MadCool, XFest, Bunbury, Beale Street Festival and I’m sure many more.

For instance, Bunbury Music Festival — which I’ve attended three times — is the perfect experience for anyone in Ohio, Indiana, Illinois, Kentucky, Pennsylvania or Tennessee. A shortish car ride from most of those states will get you to Cincinnati for the three day party. Set right on the Ohio River between Ohio and Kentucky, the smallish music festival costs less than $200 for the weekend and accomodations won’t break your bank either! I recommend the Millennium Hotel.

At Bunbury Music Festival, I’ve seen Florence and the Machine, Deadmau5, Ice Cube, Twenty One Pilots, Snoop Dogg, Bassnectar, The Killers, Muse, Haim and many, many more. This year, they are bringing Jack White, The Chainsmokers, Post Malone, Blink-182 and Incubus. GRiZ, Coheed and Cambria, Foster the People and Fitz and the Tantrums are no slouches either.

If you start looking at the lineups of Coachella and Lollapalooza and the other big festivals, you’ll see an abundance of repeat acts. So if you’re willing to forgo a couple of acts to save money and make this an affordable annual trip, the smaller, more local festivals like Bunbury Music Festival may be your best bet.