The 80s and 90s were two decades that were full of amazing sports movies. Not only were they much more memorable than others, but one thing they all supplied were story lines chock full of coaches who were either complete villains or simply inept at their jobs. Here is a quick and definitive list of the best…of the worst.

During Kilmer’s tenure as leader of the West Canaan Coyotes, he led the Texas high school power house to two state championships and 22 district championships. An accomplishment he made sure was never lost on the student body. But what lands him on this list is another stat.

The stat of ZERO.

As in he gave ZERO f–ks about his players and only gave f–ks about the trophies they could supply to his case. He proved time and time again that he pretty much hated his players and cared very little of their well being. Shooting them up with drugs to stay in the game, calling them fat faced babies, or reminding them that their fathers were “no-talent pussies.” Bud was a really just a terrible human being.

This guy didn’t pick his own niece to be on his pee wee football team, despite the fact she was the best player going out for the team! To make matters worse, he didnt even have a kid on the team himself.  Coach O’Shea was obviously a complete asshole and was clearly black-balled from big time coaching. How else would someone win a Heisman Trophy yet only find a job as a head coach of a pee wee football team in suburban Ohio? 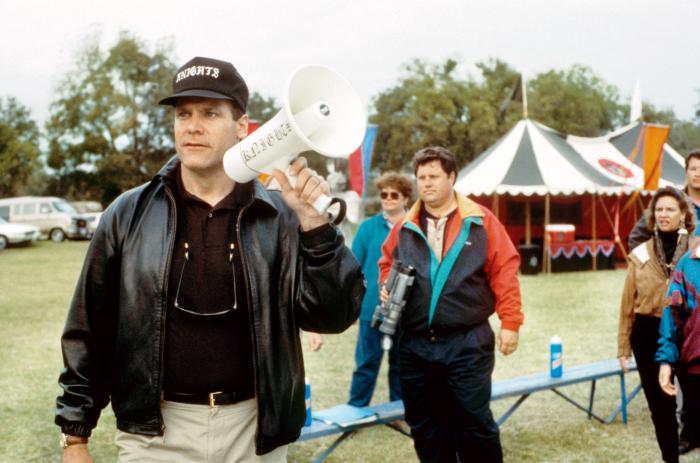 This guy is the basic check list of a coaching villain.

Go ahead and throw a check mark next to all of those attributes.

Alright this one kind of blows my mind.  Karate is supposed to about honor, discipline and self respect. Yet somehow parents were OK signing up their children to learn from a guy whose two mantras were “Strike First, Strike Hard, No Mercy” and “No Fear, No Pain, No Defeat.” So it wasn’t really any surprise that while in competition he demands that his star pupil attack his opponents injured leg. Sweep the leg, Johnny!

Ok, you’ve been reading this so you get that all these guys were horrendous humans with terrible fashion senses (see Reilly’s popped collar on his youth hockey letterman’s jacket) and gave terrible coaching advice to their athletes (“It ain’t worth winning, if you can’t win big”). But the thing that I want to ask about The Mighty Ducks is this; As a child, Gordon Bombay loses the 1970-something championship game to the Cardinals by missing a penalty shot by a quarter of an inch.  Years later, Bombay returns to the stadium he lost that game in to see that amongst all the championship banners hanging on the wall that particular year shows the banner of the Hawks (the team Bombay played for and Reilly has coached the past several decades) finished 2nd that year.  Why the hell wouldn’t they hang the banner that said the Cardinals won that year, as opposed to a 2nd place Hawks banner? Or are we supposed to believe that the Hawks have their own youth hockey arena? That’s a small detail that’s always bugged me.

Obviously the ante had to be upped for the Mighty Ducks sequel. The evil coach in this installment of the Mighty Ducks trilogy was the coach of Iceland whose name was Wolf.  Wolf was a professional hockey goon known for his dirty play.  Hence his nickname, “The Dentist.” He also hated beach balls and slashed Gordon Bombay’s injured knee in a one-on-one, coach vs coach showdown.

Kids at fat camp trying to better themselves and get healthy should have been provided a much better leader than Coach Tony. He cancelled lunch due to “lack of hustle” and tried to murder everyone at the end of the movie.  The great thing is Stiller essentially reprised the role of Perkis in Dodgeball, this time by the name White Goodman.

Jimmy Dugan (Tom Hanks) – A League of Their Own

So this one may shock some, but when you really think about, Dugan was probably the worst coach on this entire list.  A complete alcoholic who urinated in front of the women, ripped up their husbands possessions, slept through games, only really starts to pay attention when he realizes his team is good and screams at the girls for crying.  Honestly maybe he shouldn’t have been so hard on the girls for getting emotional considering the fact that all their husbands were off fighting World War 2?!??!

What exactly did Coach Winters do for the ECU Wolfpack? He wasn’t that good of a coach on the field, proven by missed bowl games. Off the field his players were failing classes, taking steroids, attacking women, abusing alcohol, riding motorcycles and receiving money from boosters. I could only imagine what the NCAA did when these violations were brought to light. I’d assume Winters never found another job and is somewhere sitting at a ESPN desk next to Mark May.

So you remember when I said Jimmy Dugan was probably the worst guy on this list? I lied, it’s Swifty. There’s really no way to sugar coat this, the guy was a sexual predator.

Coach Finstock was a guy you’d love to have a beer with. However, as the leader of young men, he left a lot to be desired. Lazy and uninterested are the best words to describe him.  It took one of his players transforming in to a werewolf for him to finally wake up off the bench.  He did however provide three rules I personally still live by “Never get less than 12 hours sleep, never play cards with a guy who’s first name is the same as a city, and stay away from any women who’s has a tattoo of a dagger on her body.”

Much like James Caan in The Program, Coach Bell was the figure head of a college program that broke all the rules. Bell had a Bobby Knight level temper flipping out inside the locker room and getting ejected from a game for punting a ball into the crowd.  However he did have quite the redeeming moment when he outted the boosters for paying players and all of the other internal problems of the program during a post game press conference, where he finally quit.