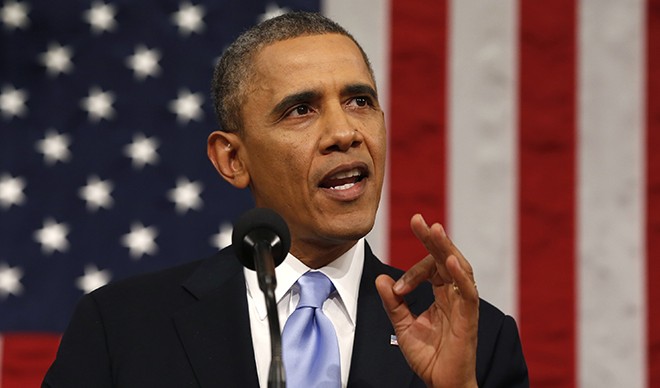 The 2015 Presidential State of the Union Drinking Game

Here at ThunderTreats, we pride ourselves on few things, but one thing we do know we’re good at is making any situation a little more exciting by adding a drink or six.  One situation that certainly has not been know for fun is the President’s annual State of the Union Address.  Tonight marks President Obama’s 7th address to the nation.  Last year showed an all time low in viewership with only 33 million viewers.  Well maybe a drinking game is just the thing to pump up interest and get more people watching tonight!

The State of the Union Address will air tonight at 9PM est on all forms of ABC, CBS, NBC, Fox, CNN, and live streaming at WhiteHouse.gov. That’s right, your Tuesday night viewing is going in the shitter. You might as well get hammered.

Through out the speech, which usually lasts about an hour, we will designate all these words to be ‘Buzz Words’ any time you hear one TAKE A DRINK.

How are you watching?

After 6 state of the union addresses the scoreboard is tied.  Three times Barry O has worn a red tie, and 3 times he’s rocked a blue tie.  Tonight is the tie breaker.

If Obama’s tie is RED

Now if the tie is Blue it will come down to shade of blue.

Please refer to this chart of Crayola for reference: If the shade of BLUE falls into one of the crayons pointing up: Drink 5 seconds

If the shade of BLUE falls into one of the crayons pointing down: Drink 7 Seconds

If any other color tie is worn:  Kill Beer

Whenever Obama uses his Right hand to point or gesture while speaking: Right Wingers take a drink

Whenever Obama uses his Left hand to point or gesture while speaking: Left Wingers take a drink

If you fancy your self an independent: Congrats you non committal jerk, you’re officially the bartender and now have to run to the kitchen or bar and get/ make every ones drink for the duration of the speech.  Unless you want to grow up and pick a side already.

If Obama describes the state of our union as:

Strong- finish drink and crush can, cup, bottle, or glass your drinking from

Anything else in the positive: Shrug shoulders and drink 2 seconds

Anything describing it in a bad shape or negative:  Shotgun a beer

If half the room stands up and claps: Take a drink

If the entire room stands up and claps: Take two drinks

If Joe Biden looks like hes falling asleep:  Drink the duration of time his eyes are closed or drooping

If Joe Biden touches or rubs his face: Take a drink

If Joe Biden gets super excited and points at someone in the audience: Finish drink

When John Boehner looks pissed of disgusted: Every one scream YUCK… last person who says it Drinks 3 seconds

If John Boehner starts or looks like he is going to cry: All players do a Waterfall

If you don’t know what the designated survivor is, its a pretty grim thing, and an unfortunate necessity. Here’s read up on it...

As of right now the DS has not been disclosed for obvious reasons so when it is known:

If the designated survivor is the secretary of Energy, Veterans Affairs, or Interior: Drink 5 Seconds

If the designated survivor is the secretary of Housing, Defense, or Other: Finish Drink

When Nancy Pelosi is shown: Slap yourself and take a drink

If a Veteran is shown: Stand up salute America and take a drink for our Vets

When Michele Obama is shown: Take a drink and promise yourself you’re going to work on you fitness tomorrow

If Obama finishes the speech with any thing along the lines of “Barry O OUT” or drops the mic… : Finish all alcohol in the house including rubbing alcohol and hand sanitizers.